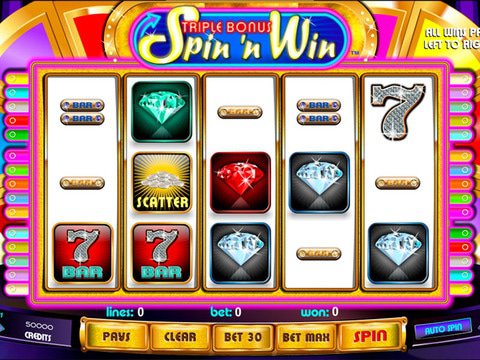 When famous slot titles often reach the pinnacle of their fame and even exceed it, there are times when developers would take them a step forward with serious upgrades that would topple their previous limits. This is especially true for classic games that are successful in igniting the fire of excitement in wagers' hearts such as how the Spin N Win Slot did it. With its absolute dominance in the market and a gameshow-like appearance, Amaya Software has further improved to raise the bar higher, giving way to the Triple Bonus Spin N Win Slot Machine. Without a doubt, there are countless things that have stayed the same with the game but of course, there are also noticeable changes that has made the game even more worthwhile. The no download Triple Bonus Spin N Win free play slot demo in this page will allow you to inspect the game further and learn just what makes it even more special with this upgrade.

Maintaining the appearance of its reels, the title and its design, the Spin N Win Triple Bonus still exudes a gameshow-like atmosphere which those who've played its predecessors would certainly be able to faintly feel. However, in closer inspection, you'll be able to easily see that the female host of the show is not there while the reels take up almost the entire space of the game. This is because through the upgrade, the game no longer exhibits a 3-reel and a single payline structure but rather, a 5-reel and 30-payline matrix that's enough to bring you massive winning opportunities. Each bet on the game could only go as high as 75 coins per spin, but the stellar amount of rewards up for the taking are simple incomprehensible. There are diverse colored jewels that can be found on the reels, single, double and triple bars, 7 Bar, 7 sign and the bell. The bell is also the wild symbol of the game which also boasts a stunning 10,000-coin prize. The free spins symbols is also self-explanatory as it can provide users with free spins to spend. There are also scatter coin symbols that can accumulatively be even more lucrative topped with a Bonus logo symbol wherein one could experience a bonus round with unprecedented multipliers, and additional prizes to indulge on.

Another gameshow-like game that has been on the industry for a long time already is the Wheel of Fortune Slots from IGT. It boasts a simpler matrix of 5-reel and 5-payline with humbler visual prowess that may be seen as something not that outstanding. However, what this game relies on is its fun setup which when combined with the amazing $50,000 jackpot, could sweep any users and wagers off of their feet.

The Triple Bonus Spin N Win Slot Machine is incomparably lucrative compared to other slot games and with that alone, it is easy to decide that you have to pick a great site to bolster your winning chances for it. We suggest Cresus Casino. This site boasts comprehensive loyalty and VIP Programs and provide privileges to members on top of a welcoming package of dollar-for-dollar bonus up to $150 and 20 free spins. It also has high-quality software system, encryption and a top mobile and flash-based versions.