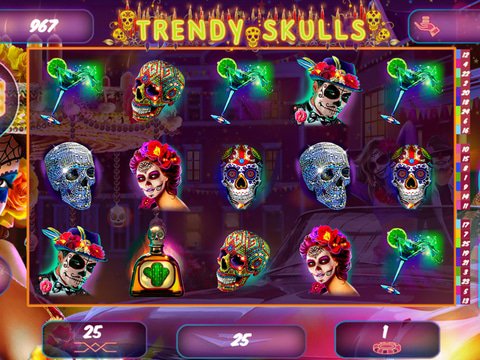 This slot machine is set in Mexico, and mainly features human skulls, from people who died many years ago. There are several skeletons that are displayed on the screen, and they are all shown to be playing different musical instruments, with one having some skeletons placed on top of their body. Each of these skeletons displayed, are also capable of singing. The slot game is set in a very dark place, in some Mexican mountain where there is music and fireworks, which lights up the sky, turning the dark place into something magnificent. The game has very good graphic setting, with the skulls making up the majority of the slot game icons. Since the skulls look very identical players are able to differentiate them by the variety of colored patterns on every skull, the number of teeth and the amount of moustache found in every one of them.

One fascinating this with this new game from MrSlotty, is that every time a player hits the spin button, the number of skulls displayed on the screen will fall off and disappear, and will be later replaced with new ones, they will then come together to form a winning combination and they will then begin to sign. This is quite a fascinating scene, adding to all this excitement is when the golden skull that resembles Elvis appears, and then explodes. Every spin brings about a whole lot of exciting deals, there are exploding wild features, dropping symbols and multipliers. There are almost 15 visible skulls, that come together to form a standard 5 reel slots, with 17 paylines, players are required to pay total bets for every spin. You are assured of a win when you land any of the 3 symbols on every payline. When players land a win in the slot game, the skulls on the win line start singing, and then they will explode, and thereafter, the skulls will fall in place where they will be replaced by other new skulls.

With other skulls coming to replace the exploded skulls, new wins are guaranteed, with every win giving you a higher multiplier, where the multiplier doubles each time. The skull with a pink skull is the highest paying symbol; it also has a rose attached to its teeth, making it appear like a female skull, until you spot its moustache, which will give you 2.5 times of the total spin amount. There are also other skulls, of orange, green, blue, turquoise colors all giving you different pay sizes.