Treasures from the Gods

Treasures from the Gods
Enjoyed playing this game?
Rate it → 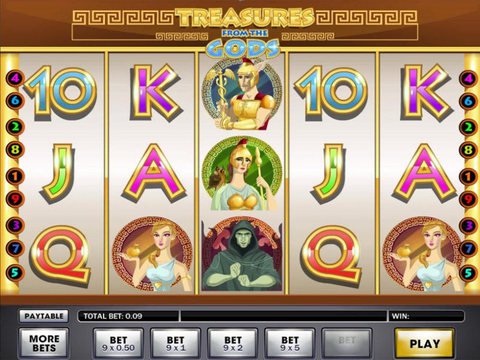 Treasures from the Gods

Treasures from the Gods Game Review

Treasure from the Gods slot machine is a no registration free play from Gamesys. Just like its name suggests, the theme of this game borrows a lot from Greek mythology. It's very popular among slot players because it doesn't cost much for them to make a bet and win big. You can try the game for free at the Canadian site Bet Cruise Casino. The website offers free registration so players don't really lose anything by signing up. There's virtually no deposit and they can immediately play after registration and get free spins and bonuses. The software list is extensive so they can download the game on their mobile or play on the site.

There's no backdrop, which means you can pay attention more to the numbers and the ticker symbols depicting the most famous residents of Olympus such as Zeus, Hades, Aphrodite, Pegasus, Hercules and a lighting bolt, which is the weapon of choice of Zeus.

As you can see, Zeus--being the most important resident of Olympus--also gets prominence in this game. If you're playing this one, you have to pray to the gods (pun intended) that you get give Zeus symbols on the active line.

How much can you win if you get that lucky, you ask? Well, take your bet and multiply it 10,000 times.

Demo Slot Machine to Keep Up with the Gods Among Us

The Treasure from the Gods slot machine has five reels with nine lines. You can actually start to play with just 1 cent with the cap at $5.00. You can also get an edge from the scatters and wild substitutes. What's good about the game is that small amount of wager you can get a payout of as much as $50,000. You can play the demo, which will give you a very good idea of what this game is all about.

You can also play a bonus even if the scatters do not necessarily drop under the pay line. The wild symbols, meanwhile, will substitute for any value under the pay line or Greek God character. Apart from that, you can have the opportunity for the win more because the wild symbol can jump over different pay lines. And you know what that means, right? More chances of winning.

The Treasure of the Gods slot machine has a similar theme with Battle for Olympus, which also has five reels but with 50 pay lines. The latter, however, has better graphics and backdrop. It's also one of the most popular land-based casino slot machines around. Another similar 5-reel game is Age of the Gods: Prince of Olympus, which only has 25 pay lines but boasts of a lot of bonuses. Minotaurus is another Greek-themed slot. The review for that game can be found here.