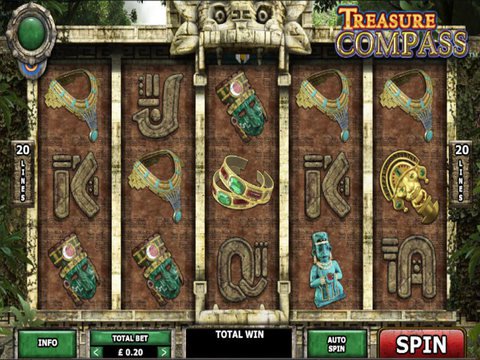 If you love ancient civilizations, then you will absolutely love Treasure Compass slot machine. The theme of this game from Geco is the Mayan Civilization. The backdrop behind the reel is a thick jungle, just like when Central America was not yet conquered by invaders. You can play the free demo, no download software on Video Slots Casino.

Visit the top Canadian gambling site to play Treasure Compass along with over hundreds of other titles. This website is widely acknowledged to be one of the best around, with a very high payout rate. Signing up will give you a bonus of as much as $200, which you can claim and use when you play for cash.

Treasure Compass slot machine has five reels and 20 pay lines. You can bet from 20 cents to as high as $50. Unlike some titles out there, this no download game offers the ante bet, which will multiply your wager in wild wins too as much as 10 times, meaning you get as much as 200 times of your bet per line. You can adjust this ante bet accordingly.

The autoplay feature will give you the choice of limiting your loss or win amount. You can play to as many as 25 spins, with a total stake of about $11,000.

As for the symbols, you will see the letters A, K, J and Q. It's filled with Mayan culture and artifacts like gold coins, golden bracelets, a mask and an image of an idol. The wilds here are represented by the Treasure Compass and the logo. They can replace all symbols except the scatters.

Speaking of scatters, if any of them show up on the reel, you get to spin once again. If three or five scatters show up at once, you get to unlock the mystery prize (the only exception is if there's a wild that appears on the screen which will forfeit your chance). The mystery prize, in this case, will multiply each bet line to as much as 1000.

The chance to re-spin if even just one scatter will appear on the screen will really increase your chances of winning. This is a very good game to waste a number of hours on. Even if you play for a free demo, you will surely love its gameplay.

There are so many treasure adventure games similar to the Treasure Compass slot machine. How about Zuma, which is an Aztec-themed slot from Gamesys? The Aztec and Mayan are practically located in Mexico, although they don't share the same epoch. Then there's The Great Griffin, which is based on the Greek mythical creature with the body of the lion and the head, wings, and talons of an eagle. This one also has five reels and 50 pay lines. You can already play the game with just $0.01 but can increase that wager up to $50.