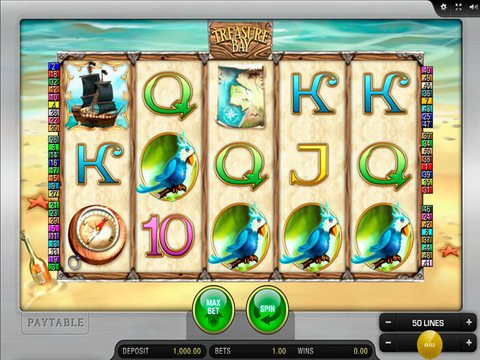 Despite the fact that Pirates have become famous for their vicious acts from Pillaging, Plundering and conquering shores and towns they meet during their voyage, their goal still remains the same and that is to amass wealth and experience the lavish things life has to offer. What if you could get that goal just from docking into the right bay? Merkur Gaming gives the opportunity for want-to-be pirates to finally amass treasures with their luck, through the Treasure Bay Slot Machine. This game will welcome you in a shore filled with varieties of treasure - all you have to do is match up the items you see and voila! You'll get the riches you always desired to obtain. Walk over the shore of this outstanding game and get to know if it's the right one you're looking for without the need of exposing yourself to risks, through the no download Treasure Bay free play slot demo version of the game.

A Shore Filled With Treasures

Prepare your boats and your bags as there's no doubt you'll be filling them up sooner or later with loads of cashes and piles of treasures that will finally get you the taste of the luxurious life. You do not have to traverse the seven seas any further as the 5-column and 50-payline reel setup of the game will surely be all you need to make get the tons of money you're aspiring to have. The presence of 50 pay lines in this game also opens up a lot of doors for winning opportunities with its low-variance gameplay which is something that any wager would surely be more than willing to place their moneys on. Betting range can also be easily adjusted and the lines as well, which can equate up to a maximum of 20 coins in a single spin stake. It is important however, to note that the game's reward isn't the biggest but, it still matches perfectly with the low-variance setup which means that even though the prizes are small, chances of it accumulating to wads of treasures isn't a lost cause. There are plenty of card icons in the game along with the parrot of the crew, a compass, map, the ship, the female captain and an eye-opening Treasure box filled with gold. The Treasure Bay Treasure which is the Treasure box, acts as the scatter of the game as well as the key to entering the game's stunning Treasure Bay Feature while the Female Captain is yet another special symbol which is ready to bring about its substituting capabilities to help you win the game.

Quickspin with its Treasure Island Slots is also a Pirate-themed game that will bring you a stunning experience. It comes with mesmerizing, robust and high-quality graphics and art packed in a 5-reel and 40-payline structure which utilizes adept features from stacked wilds, bonus features, scatters and more to aid you in winning its jackpot.

To make sure that you'll gain massive rewards in Treasure bay Slot Machine, be sure to play it at Lvbet Casino as it will subject you to heaps of promotions that will allow you to maximize your time and chances in playing the game. You'll be able to revel on match-up deposits, to free spins bonuses and other promotions.