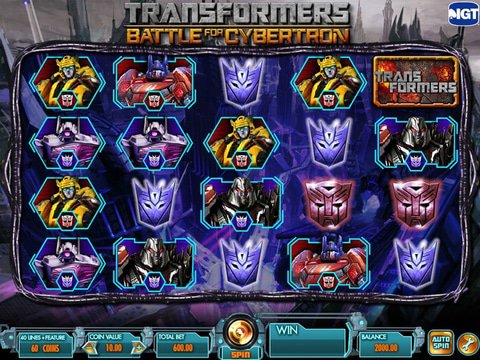 The slot machine game gets its title from the hit TV animation and movie series, the transformers- robots in disguise. The slot game is developed by the IGT gaming developers, and is one of the best online games for fun to play. The slot game, Transformers is based on the battle between good and evil, which is symbolized by the autoboots and decepticons. Players can play this slot game, either for fun, or for real money. In order to play for real money, guidelines are always available in the slot game website, and can easily be accessed. Players of this slot game will come to notice that every time they play the slot game, the graphics will re load and the transformers theme song will begin to play, which is immediately followed by a voice calling out the words, "Autobox...Transform and Roll out".

If you wish to play IGT games for real money transformers is the slot to go for, it comes with 5 reels, 25 paylines and 3 rows and you can put up stakes as low as 1p, therefore, they can play the entire pay- line load for about 25p for every spin. There are a number of exciting features available in the slot game including; expanding wilds, where there is a robot which rises to cover the entire reel. Two or three expanding wilds on the screen can bring about enormous wins; five expanding wilds will bring about a total win on the entire jackpot prize. The cyberton wild symbol, also expands and gives you the ability to choose from three planets, where every planet hides a multiplier for every wild symbol. There is a big bonus feature that is made up of robots, who try to outdo each other.

In this big bonus feature, players are required to arrange bonus symbols on either reels one and five. After aligning these bonus symbols players are then expected to choose the transformer symbol they would like to represent. Thus, the robot you choose will help you in winning, attached to the bonus feature is the free spins, which will enable you to get more bonus points which are in the form of real cash, as you continue lining up the symbols. Once in a while, a robot appears on the screen which starts a fight scene. There are a number of various moves that are shown on the screen that are quite a thrilling show for the players. Every time you score, your bonus cash is increased, and the final winner is the first robot to cause three big hits on the others. The game is mostly recommended for fun, rather than for real money since it has a pay-out of 92% which is low.

The Dungeons and Dragons slot machine game is very similar to the transformers, since the bonus round requires you to fight several battles. When you come to grizzly gambling, you will enjoy more IGT Slots for free.