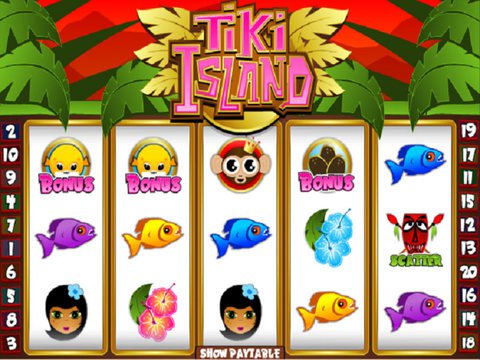 Tiki Island's initial release became so popular that it was immediately followed by a second game of the same theme, Tiki Temple. Demands for Tiki Island slot machine became so tremendous that Gamesys featured the game on most established casino sites. If you want to play the free demo with no download and no registration required, the game can be found on this page Gamesys.

Playing a game of Tiki Island takes you away to the tropics with its breathtaking sceneries and giant forests covered with lush greeneries. It has quirky cartoonish characters and cartoon-like graphics that add to the mystery and spontaneity of the game.

Reels are framed with bamboo shoots giving you an authentic feel of being on a tropical island with giant trees and thicket covers the entire screen. What makes the game enjoyable is not just the lush sceneries but the huge reward it offers. Getting your hands on this game can be pure fun and excitement. Every stage of the game is loaded with stunning scenes of the tropics adding to the heart stopping thrill of the game.

Tiki Island is a 5 reel, 3-row slot with a total of 20 pay lines which is respectable enough for a slot game. The game has a typical spinning reel featuring symbols that should be matched with the chosen pay lines. Just like any slot machine game, hitting a combination of symbols on a pay line corresponds to a prize. This depends on the type of symbol the reel stops at and the amount of bet have corresponding to the combination.

The reel symbols are also part of what makes the game interesting. Common symbols of Island Tiki include tropical fishes in colors red, blue, purple and yellow. A blue and pink flower is also a common symbol but has low payouts. High paying symbols include a native girl, a mask, and the money. Getting a combination of five monkeys would double your wager a thousand times adding to the thrill of a game. Tiki Island is also big on bonus games including selecting fresh fishes and winning the rewards they contain.

Super Caribbean Cashpot by 1x2 Software is a similar tropical-themed slot game. Playing a game earns rewards by looking for hidden treasures. Symbols are also reminiscent of the tropical world including a seagull, coconut shells, and tropical fruits. The vivid colors also give you the feel of taking a vacation somewhere exotic.

If you live in Canada and want to experience a lush tropical setting when playing online slots, visiting the best Microgaming casinos can help. Sites such as Bet Cruise Casino offers some of the best slot games including Tiki Island. They have tons of great rewards such as a $1,000 signup bonus and free spins for an extended gameplay.