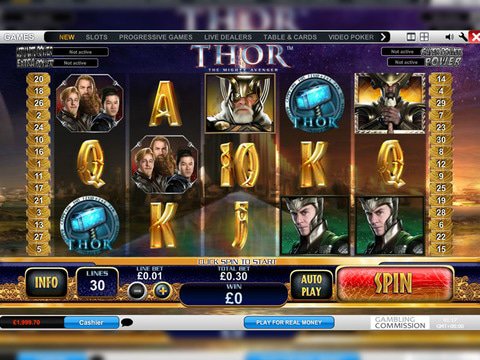 The Marvel Collection and its heroes have gone out and dominated various markets and industries with their iconic heroes. One of the most powerful even in the line of Avengers itself is certainly Thor, a powerful God that's bound to shock and electrify you with his powers, literally. Thor's fame as an Asgardian God is well-known by Marvel fans and if you're a fan of the guy, then you'll certainly be thrilled to play the Thor Slot Machine developed by the software developer giant, Playtech. Witness the Thor's First movie come into being in this game and relive some of the most epic moments of that film all whilst gaining the chance to win lucrative amount of rewards along the way. The no download version of the game in the form of the Thor Free play slot version in this page will allow you to review and check out the game so you'll get accustomed to what it has in store for players right away.

With the magical, mythical and legendary world of Asgard filling the backdrop of the game, you'll certainly be filled with a sense of adoration and extreme motivation as you play the Thor Slot Machine. The reels at the center is beautifully provided with an intricate set of controls, worthy of the theme of the game. Every elements of the game harmoniously works together, while the symbols itself are exceedingly perfect as they come straight from the movie itself, featuring realistic photos of the characters themselves. Fandral, Hogun and Volstagg can be found on a single symbol and another symbol portrays Sif. There's also Loki and the God, Odin along with Heimdall and Thor himself. Heimdall is a special symbol that trigger the Rainbow Bridge Feature, allowing you to enter free games on two different worlds - Jotunheim and Earth. Each special free game comes with its own twists that you would certainly be dying to witness yourself. Thor on the other end, is a stacked wild of the game, emboldened with a thunderous capability of bringing lightning free spins and re-spins. There's also the Thor's Hammer symbol along with the fact that the game makes use of Marvel's Progressive jackpot, leaving more than a lot to look forward to as you venture the legendary world of this God and Hero.

Thor: Stormlord Slot machine from 1x2 Software may not be capable of standing next to the Thor Slot Machine from Playtech in terms of graphics, but for real Thor fans, they will surely be able to appreciate the efforts of the game in portraying a Viking-themed game that's the origin of Thor himself. You'll see Mjolnir in this game as well, along with a golden lady wild symbol and more that will aid you in defeating enemies and conquering the reels for prizes.

As electrifying, galvanizing and exhilarating the Thor Slot Machine could be, it is always something to remember for players, to always play with all the advantages you could muster. Enjoy a deluxe experience by playing at Slots Million and revel on a slew of bonuses from match-up deposits and free spins bonuses that'll come your way. Whether it be on Asgard, Jotunheim or Earth, playing at this site will make sure you succeed.