The Slotfather: Part 2
Enjoyed playing this game?
Rate it → 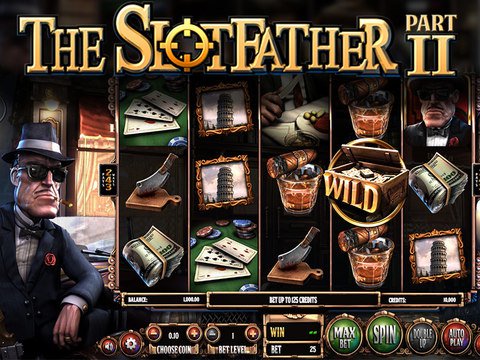 Betsoft has already come a long way since the company software released its Slotfather gaminator. This title made Betsoft popular in terms of creating 3D gaming machines. Lots of new game titles have been launched by Betsoft, but you will definitely love the idea that the same company built a sequel for its famous Slotfather. You may review The Slotfather: Part 2 slot machine on this page using the free demo version. It requires no download and no registration so you can easily play the game.

This 5-reel game might just be a sequel of the original game, but rest assured that it has its own charisma to lure players. Both the original and this second release revolve around the story of a crime syndicate. You will encounter gangsters and their paraphernalia in plotting their delinquency. The number of pay lines set the two versions apart. The first release has only 30 pay lines, while the Part 2 has 243 ways to bet. Other than that, the visual design of the second version is much enhanced compared to the original.

Another difference between the two releases is the fact that the latest version can be played using your mobile devices. It has been created to be compatible with portable gadgets so players can enjoy the game wherever they go. You can access the game using different platforms such as Android phones, tablets, iPhones, or iPads.

The Slotfather: Part 2 slot machine allows players to place bet ranging between 0.50 and 125. The wide range of stake lets you play the game on your most comfortable phase. You can effortlessly configure the amount of bet using the buttons at the bottom of the screen.

Rewards from The Slotfather: Part 2 Slot

Pile of cash, knives, cigar, poker tables, and the leaning tower of Pisa are just some of the symbols you need to match in this game. Of course, the images of the gangsters are also included. Among all the symbols used in the game, the slotfather himself is the highest paying symbol when matched.

The game is not all about the regular payouts. Bonus round and free spins make The Slotfather: Part 2 slot machine more special. The scatter symbol of the game is represented by a truck. Three or more of this vehicle can trigger up to 20 free spins wherein your winnings are multiplied twice. You can even re-trigger the free spins as long as you hit another truck. On top of that, Big Boss Bonus is awarded to your credit at the end of free spins.

There is also a special feature that can be enabled with the help of some gangsters. Depending on the gangster on your side, you can win certain amount of cash from an envelope handed to you. Fat Tony, Frankie Knuckles, and Snake Eyes Sammy will give you free re-spin and they can also be expanding symbols to cover the reels and win more prizes.

Playson software also created a game with the same theme as the Slotfather. This is entitled Reel Gangster slot, which has 5 reels. It is a better option if you prefer to play a machine with lower pay lines because Reel Gangster only has nine (9).

Check out the Slots Million Casino to try The Slotfather: Part 2 free play slot. Players from different countries like Canada can also play this game with real money.