The Royals: Go Camping
Enjoyed playing this game?
Rate it → 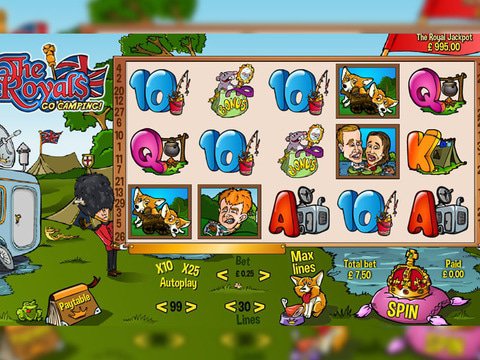 If you've thought about a Drama movie or even a song just by hearing the name of The Royals: Go Camping Slot Machine, go a few steps back and think in a more general term as this game developed by 888 Holdings is more encompassing than it seems. Though Monarchy may not be the most imminent form of ruling nowadays, the power of Royals have never dwindled especially on the English lands. One of the most prominent task or activity the Royals covet to do for their daily lives is hunt or even camp, which is the core ingredient that makes the aforementioned game exciting. Enter the weird yet tantalizing world of this game through the no download The Royals: Go Camping free play slot demo and find out how its surprising features managed to reel in the attention of Canadian gamblers and more.

888 Holdings have undeniably thought out of the box in producing The Royals. With the vast number of art forms present, they picked Caricature to represent the majestic aura of this blue-blooded individuals, which greatly made the game fun with their horrendous yet extremely funny uptake on Royalty. The game's cartoon world makes it evident that the Caricature art was pushed through and through and you'll certainly be glad to know that there's lots of symbols on the game that you'll more than find entertaining. Aside from card icons, you'll see Kate, William, Harry, Prince Charles and even the Queen on the reels which reinforces the theme of the game. Though these characters are noteworthy enough especially with their prizes, what you have to set your eyes on are the special symbols. The Raven on a crown holds the responsibility of being the Wild of the game while the Bonus icon of the game has the capability to bring two different rewards depending on the conditions you meet. The game's controls on the other hand, is also noticeably better than other of the brand's games and the 5-reel and 30-payline matrix is also within the manipulation prowess of the user, making it extremely convenient and useful.

Another royalty-themed game that portrays various characters from Queen Elizabeth and more, is the Regal Riches from RTG. It has a tad lower matrix with a 5-reel and 25-payline structure compared to the Royals: Go Camping Slot Machine, but it comes with a graphical aspect that's similar in level when compared to each other. The game is also equipped with a staggering progressive jackpot that could be a life-changing sum of money for anyone, making it a worthy game to play for any wager who's vying for richness and glory.

If you think that it couldn't get any more fun with The Royals: Go Camping Slot Machine, then think again because if you pick the right place to play it at, you'll be in for some sweeter surprises. The site recommends 888 Casino to be your go-to site especially when playing 888 games. Here, you'll be able to make use of a sea of advantages from top encryption, banking options, customer service and more. You'll also have more chances of winning with its comp point system, no deposits bonus and even lucrative deposit match-up bonuses.