The Incredible Hulk
Enjoyed playing this game?
Rate it → 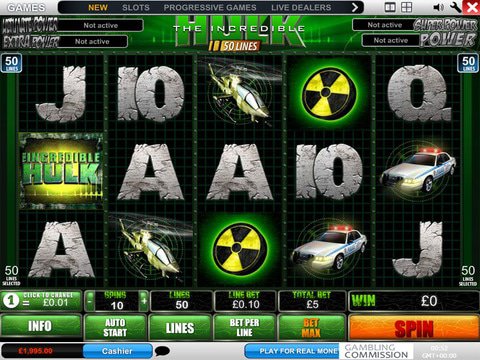 Have you ever imagined yourself as one of the heroes from Marvel, DC Comics or even other sources you could think of? One of the most powerful hero from the Marvel Universe whose powers have been a target of fantasy for many, is the Incredible Hulk. Smashing his path in an uncontrollable rage brings forth a rather inspiring form of rampage that any viewers would find very addicting. Now, Playtech has brought this green monster out from the comics and movies and into the world of waging, through the game, The Incredible Hulk Slot Machine. In this game, you could experience the radioactive life of this green monstrosity and smash your way against your opponents to earn prizes and a whole lot more. The Incredible Hulk Free play slot version in this page will help you get accommodated with the game a lot easier than you could imagine. Review and familiarize yourself with it, and you'll find yourself comfortable playing it for real money later.

Hulk Smash your way to Wealth

The game is literally doused with green color, which is already to be expected since the Hulk is the star of the game. The background is a brimming and scintillating green color, while the reels come in a grid-like background with green grids and black overall backdrop. It creates a visually compelling, radar-like reel that's used to track the Hulk when he goes on a rampage. The game runs on a powerful structure containing a 5-reel and 50-payline matrix with a betting system that spans from £0.01 to a massive £500 bet per spin. The game has a superb line of icons made ideally for the theme of the game. Even the card icons emanate green radiation when on a winning combination, making the game incredibly impressive. There are also police cars, chopper, a beaker of green substance, a radioactive sign, hulk and more. Hulk is a powerful wild symbol in this game, providing an electrifying Expanding feature that allows him to take over a reel and bring forth his massive wild effects. The Game Scatter logo on the other end, could bring players a whopping multiplier and free spins while the Smash Bonus symbol could help lead you to the Smash Bonus feature of the game.

It's pretty hard to top the Incredible Hulk Slot Machine, especially given the fact that it makes use of Playtech and its incredible progressive jackpot prize. Still, if you want to venture on a different Marvel hero, then the Spiderman Slot is something you would want to check out as well. It comes with a graphically impressive reels, topped with a 25-payline matrix topped with up to 5000 coins jackpot prize. It comes with various bonuses to lead you on your path to victory as you eradicate villains, earn rewards and more.

Play the game with ease and full confidence that you're optimizing every aspect that needs to be maximized, by engaging on the game via the Slots Million Casino. This site offers massive promotions from free spins bonuses, dollar-for-dollar match up to $100 and a whole lot more. It also has crackerjack features, security and more. However, do bear in mind that flash-play version is the only way to go on this site - no download and no mobile versions available.