Home Free Casino Games Slots The Heat is On

The Heat is On Free Play Demo

The Heat is On
Enjoyed playing this game?
Rate it → 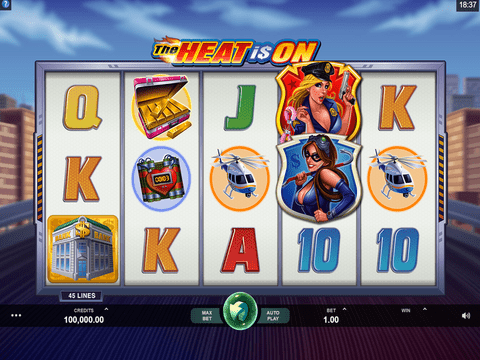 The Heat is On

The Heat is On Game Review

Despite the title of the Heat is On Slot Machine, it's undeniably far from being something you'd play to expose a summer vibe. This game from the first-rate and terrific game-developing giant, Microgaming, is a game based on hot pursuit with two police women on the lead to bring down the deviant criminals. Though it may not be a summer-based game as you may have hoped for, it would still bring you an invigorating heat of excitement which could unquestionably appease your mood and satisfy you. Even Canadian Gamblers found this game extremely exciting as it continuously spread its fame throughout various places. It may not be the most compelling game right out of the comprehensive and outstanding capabilities of the software, but its lucrative characteristic is definitely enough to ignite the ardent mind of anyone. Get a test drive of the game in this pursuit with the no download and no registration The Heat is On Free paly slot demo and learn more about the game.

The game happens as villains of the city manages to rob a bank. Now, it is up to the saviors of the city in the form of the two women, to get their hands on the fast-escaping villains. On the road, there's a lot of possible transportation and you'll be excited to see motorcycle, helicopters and more ways to get your hands on those pesky villains. The game's backdrop itself is a perspective of the road as a vehicle traverse it, while all the while the clouds encompasses the sky and the buildings accompany you along the way. Aside from the Bank, Helicopter, Card cons and motorcycle symbols of the game it also makes use of common card icons, gold bar and more. The game spans across 5 reels with a quirky 45-payline matrix. The bonus symbol of the game is the Bank Scatter and it could trigger the start of free spins bonus for players. This bonus symbol is also very generous as it can even provide multiplier on top of every benefits it already has, making it even more lucrative than what you may have initially made it out to be. With these symbols, chances of the police women in capturing the villain have increased tremendously, as well as your chances of winning phenomenal jackpots.

Microgaming isn't the only who have taken the law enforcement category as part of the reels as Saucify has done so as well in its Code 211 Slot Machine. The game comes in a more robust, solid and dark atmosphere with its 5-reel and 15-payline matrix. The jackpot of the game skyrockets up to 150,000-coin jackpot which is a staggering $15,000 jackpot. This kind of jackpot would surely be able to motivate you enough to hasten your pursuit and dominate the road by bringing down the villains.

Even with the prestige of the software mentioned, it is certainly not the end-all of everything. If you want to make it more worthwhile to play the Heat is On Slot Machine, then we advise you to give it a try via the Jackpot City Casino. You'll surely feel you've hit the Jackpot as soon as you enter, with the site's whopping 100% match-up to $1600, 20 free spins bonus and way more than what you could imagine.