The Great Escape
Enjoyed playing this game?
Rate it → 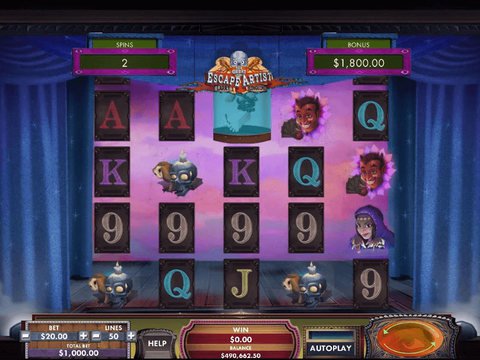 What does The Great Escape slot machine from Genesis and the 1963 movie starring the late great Steve McQueen, James Garner and Richard Attenborough have in common? Nothing really, except for the name and they both take place in a jail. You can play the no download, no registration slot on Slots Million Casino. Signing up entitles you to a no deposit bonus of as much as $100 and 100 monthly free spins. No matter what genre you love, you can choose from the 1,100 slot titles on the site.

As the name suggests, The Great Escape slot machine takes place in a prison as you try to outwit jail guards on your quest to freedom. The convict can no longer live behind the thick walls. The symbols are what you might expect based on cinema's depiction of prison life. For instance, there are the scratched numbers on prison walls or thugs.

The best thing about this game is the story, and it will really draw you in. You get engaged in this convict's quest to escape. The ultimate goal, of course, is to scale that wall and for that, you need a very strong rope and laugh all the way to the bank via the more than $70,000 jackpot. To get there, however, is a journey in itself.

The game starts slow enough, which is what you would expect when you spend time in a prison. The nights are long and the days are even longer. Not much is happening until the Pick Me Bonus when you get three symbols of a ball and chain on the reel. You need to find more of this symbol in order to add to your reward. However, there's a catch--you can only select one. This is the reason why you have to be smart about your choices.

Just to give you an idea, one of the symbols hides a $2,000 price behind it. The game is cruel in the sense that it tells the punter what he or she could have won after already having made the choice.

There's a mini-game in The Great Escape slot machine when you find yourself inside the Prison Escape Bonus round. In this game, you are given several ropes to choose from. The better you pick, the higher the monetary reward will be. Be careful, however, as the wrong choice will result to the rope snapping up and you stay in prison forever.

The Great Escape is a unique game and you won't find many titles out there with a similar gameplay. But if you like a good old caper, you will love this title from Microgaming called Cops and Robbers. A very simple game but with high rewards as you can win as much as $5,000 on a single play.