The Great Cashby
Enjoyed playing this game?
Rate it → 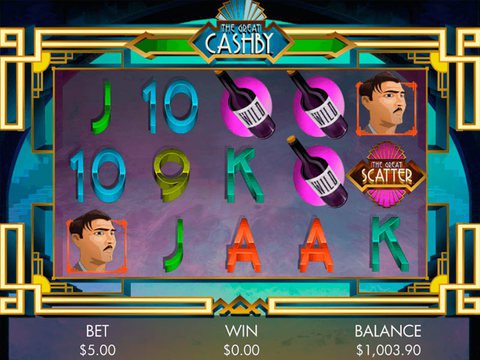 The Great Cashby is a 5 reel, 25 pay lines slot game created by Genesis Gaming and was influenced by the classic book written by F. Scott Fitzgerald and the 2013 film adaptation, The Great Cashby. Game symbols are what you would expect from the namesake with characters straight out from the literature.

Just like the book, set in the 1920's, the slot game offers some pretty exciting gameplay, with a jazzy background that teleports you right into the era. A free demo of the game can be found on this page Genesis with no download and no registration required.

The game itself is not as challenging especially when pure luck is what it takes to survive. Gameplay features an iconic jazz sound that will take you back to the 1920's. The game also has reworked with some of the symbols from the 2013 film adaptation with characters such as Daisy, Nick, Jordan, and Gatsby among the reels.

Bets can be placed from $0.25 up to a maximum of $5.00 and jackpot price can be a huge as $2,000. The game also has several levels and completing each stage corresponds to a stake of the cash prize. Completing Level 1 doubles your stakes, Level 2 x4, Level 3 x12 and Level 4 can award you with as much as x24, and Level 5 with x48 multiplier. Being a low-risk slot game, the Great Cashby provides tons of fun without going bankrupt after a few losses.

The wild symbol is represented by a bottle of champagne which can be used to replace other symbols in forming a winning combination. It can appear as part of a winning combination or as part of a stacked symbol which can be used to complete a group of identical icons that lands a pay line. The scatter symbol has a name tag "The Great Scatter" which opens the bonus game of Back Room Bar when simultaneously placed on reels 1, 3, and 5.

This 10 bet free spin in-game bonus takes you to a back room bar to complete a series of rounds with cocktail drink symbols which serve as the 5 Great Cashby game levels. Your objective is to create a combination of winning streaks by landing similar cocktail drinks on a pay line. Winning this bonus game will advance you to the next level of the game.

Rewards will also be based on the amount of your bet on the spin that prompted the bonus game multiplied by the multiplier of your current game level. The Great Cashby has multiplier factors as stated above.

Rocky, a game made by Playtech has a similar pay line and number of reels. This game adaptation of the Sylvester Stallone movie is also based on a film's lead character Rocky Balboa. The game was developed with symbols that are designed with playing characters straight from the movie.

Visiting Canadian gaming sites Slots Million Casino will let you enjoy thousands of slot games including The Great Cashby. They have huge signup bonuses and mobile compatible games for gaming on the go and hours of extra fun.