The Dead Escape
Enjoyed playing this game?
Rate it → 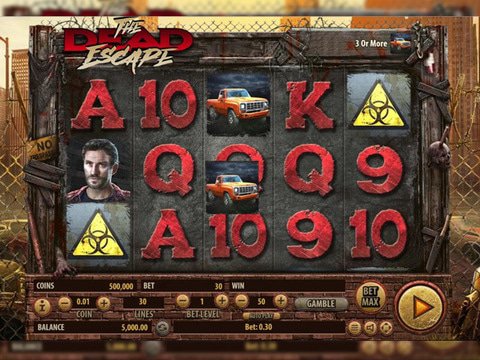 Although Habanero Gaming Software is indeed not the oldest and not the youngest in the software slot industry, it is definitely one of the arising talents that's bound to shine relentlessly in the future. Not to mention, it has even made countless games already that can easily match others from leading software developers, one of which is part of its latest creations which is The Dead Escape Slot Machine. If you already had a bite in some horror movies, games and more, you'll know already where the title of this game leads to - zombies. Despite the subject being a bit cliché and overused in the industry already, there's no doubt that clear distinctions has been made by the software that'll surely rock your world. See the thrilling and spine-chilling excitement in this game through the no download and no registration The Dead Escape free play slot demo and revel on what it offers with no risks involved.

Running from the Dead

A post-apocalyptic setup is like thin ice in the industry. It has already become so overused that treading it is supposed to be done with intricacy because if failure happens, every effort done from the start will blow apart. Fortunately, Habanero has managed to portray a post-apocalyptic setup wonderfully, that'll even make you reminisce about famous Zombie movies and television shows like The Walking Dead and more. A fence with barb wire and a broken bearing is keeping you apart from the cities littered with zombies, topped with a sepia tone that even makes the environment feel more tragic. The 5-reel and 30-payline matrix of the game is situated at the centre while below it is the comprehensive control system, used to adjust settings of the game accordingly. It should be pointed out though that the pay lines are fixed so the betting element you can only change is the coin denomination and the betting level, which can even make bet rise up to $1500 coins per spin. Opportunities equivalent to your capability as a roller are present in this game in abundance and you can achieve them with the help of the symbols of the game. Aside from the low-paying card symbols of the game, there's the zombie hand symbol, the hazard sign symbol, the girl and the man survivor symbol. There's also the orange truck that acts as the scatter of the game to help along the way, while the wild of the game comes dashingly in a stacked form. A Zombie is also a wild of the game while there is even a 'Duel' feature of the game that'll pin characters against each other.

Play with corpses that are more elegant that what The Dead Escape Slot Machine has to offer, through the Graveyard Shift Slot from Playson. It serves a 5-reel and 9-payline matrix to users but more than that and the elegant corpses there awaits you up to 6000-coin jackpot in this humble game.

Enjoy a lucrative time playing The Dead Escape Slot Machine, with the help of the prestigious Tropezia Palace Casino. Its initial deposit dollar-for-dollar match-up of up to $100 may not be the most impressive in the market, but there are ongoing promotions on the site, topped with a multi-software system, high-calibre customer support and beyond.