The Crackdown
Enjoyed playing this game?
Rate it → 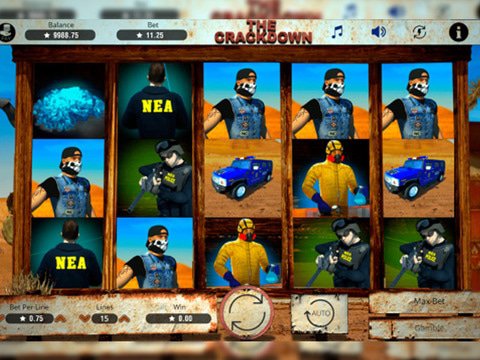 The slot industry definitely isn't new to the idea of putting famous movies on the slots, but there are little to no titles when it comes to famous television drama series, so Booming Games Software has taken the initiative to host one of the best in this genre - the Crackdown Slot Machine. The Breaking Bad Television series has become a hit ever since its advent and in its short years of airing, it has become a total favorite, making it a great choice for the company to make it the subject of their expansion and creation. The Crackdown free play slot demo will give you a view of this game that's loosely based on the aforementioned television shows and whether it lives up to the brand's reputation and the players' expectations would be up to your own judgement. No registration and no download is also needed to proceed, making it a great news for those who are hesitant against hassles and risks.

Crime and Rewards Up for Taking

With Breaking Bad being a crime television series, it is expected that the game also tackles the same subject and needless to say, Booming Games Software has done rather well on the graphical department as per expected by majority of their players. The sandy and barren lands of Southwest America has been laid down perfectly with the vast skies encompassing the screen as well. The game takes pride in its structure that contains up to 15 pay lines while users can bet a maximum of 45 coins in each spin. At maximum, the jackpot prize of the game is a staggering 45000-coin prize, which you can get if you successfully locate the piles of cash in the game, which is also the wilds that can help you get winning combinations a lot easier. A night vision view of a place acts as the scatter of the game, giving only 900 coins payout at max, but with the privilege to give stunning free spins to lucky users who get three or more of them on the reels. Other symbols that you could locate and give you rewards on the game includes a scientist wearing an anti-radioactive yellow suit, the NEA in full black suit, bandits a blue truck and a back view of the NEA. The game comes with a heart-thumping audio as well, building the excitement to its maximum and making the game more invigorating than what one may have expected from it.

Coming in a more classical approach, the Rival gaming has also created their crime-related slot game, the Reel Crime 1 Bank Heist Slot. It is equipped with a 5-reel and 15-payline gameplay that may not be as classic as you'd think, but there's no doubt that you'd find its traditional appeal more than convincing. It makes use of various crime-related symbols that does justice to its theme, while a maximum $3750 jackpot is available up for grabs to lucky winners.

Despite a few number of casinos to choose from to play the Crackdown Slot Machine, we still recommend players to give the game a spin through the renowned Tropezia Palace Casino. This multi-software system site comes with superior security, banking options and support, along with unbelievable set of bonuses to help you on your waging endeavor.