The Catfather Part II
Enjoyed playing this game?
Rate it → 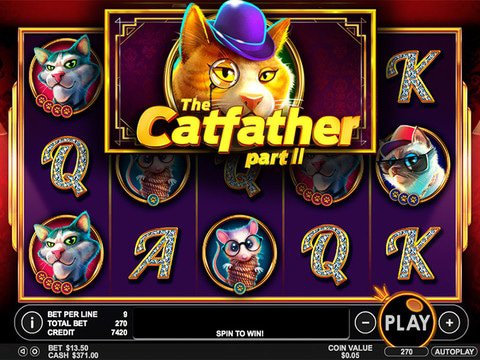 Play with the fiercest felines in town through The Catfather Part II slot machine. You can review the game right on this page by practicing through the available demo version. Access the game for free with no download necessary. It will give you a preview on how you can take home the wealth and treasures of kitty mafia.

Inspired by the trilogy movie about the Godfather, the Pragmatic Play has created a parody including cats once more. The same software company has already released The Catfather slot machine and this original version has become a success in the gaming industry. Hence, the Pragmatic Play launched another game which is a much improved version of the initial installment. To distinguish the newer release, it includes 30 pay lines. This number is way larger compared to the 9 pay lines of the first version. Aside from the difference on the presented betting lines, the second version's amount of payout is much higher than the original.

The Catfather Part II slot machine allows the players to spin five reels on three rows. The same set of powerful felines from the original game has been brought to this latest version. However, the fat ginger cat from part 1 cannot be seen on part 2. This cat represents the character of Vito, a chubby-cheeked gangster who seemed to die on the first movie of Godfather. It can be considered as a clever touch on the game, Pragmatic Play's attention to details is remarkable.

In order to win the game, you need to place your bet first. You are allowed to stake up to 10 coins per line, giving you a chance to place a maximum of 300 coins on a single spin. Low rollers can bet lesser amount as low as 0.01 coins on a single pay line. Another great feature of the game is that it can pay in both directions, left to right and vice versa.

Among all the cats in the town, the black one pays the highest amount. It is so generous that it can give you up to 5000 credits when you hit three or more black cats. This cool feline also acts as the wild symbol of the game, which can mock the other cats and replace them to create a winning combination. It can also trigger a random stacked wild feature.

Make sure to keep an eye on the gang's golden suitcase as it serves as the scatter symbol. Once you find three or more golden suitcases, you can enable 10 free spins. Depending on how many scatter icons you got, your winnings during free spins can be multiplied up to 15 times.

Since the Godfather has conquered the film industry, lots of gaming software rode to its popularity. Godfather-themed game machines became trendy. While the Pragmatic Play focuses on cat lovers, the Microgaming caters the dog fanatics. Thus, the latter created the DogFather slot machine, which has 20 pay lines. This game also caught the attention of many gamers because of its amusing graphics and features.

Canadian players are very welcome to practice on Slots Million Casino. The online gaming site offers The Catfather Part II free play slot. It is also recommended for players who choose to play with real money. Mobile version of the site is also accessible to all.