Temple of Luxor
Enjoyed playing this game?
Rate it → 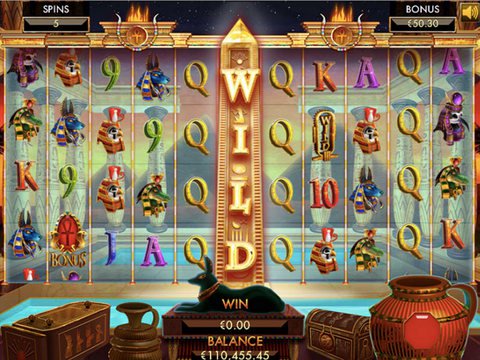 Take a trip on the ancient civilization of Egypt in this exciting game developed by Genesis Gaming. The name of the game is derived from the influential religious complex located in Southern Egypt which has been home to some of the most distinguished Egyptian pharaohs of the time.

Temple of Luxor provides a different way of playing slots with its numerous reels that can be called unconventional for its game type. It is a challenging game but with an astonishingly huge reward that can make every gameplay as interesting as the character symbols. A no download no registration required free demo can be found on this page Genesis giving a first-hand try of the Egypt-themed online slot.

Being one of the first slot game to feature two sets of 5 reels, Temple of Luxor is a fantastic game for anyone who wants to have a challenging gaming experience. The game has 50 pay lines being the first to offer a unique payout strategy. It has a mirrored payout setup with 25 pay lines on the left side and 25 on the right side. Winning combinations from the first reel are considered from left to right and the second reel pays out with a combination of winning symbols formed from right to left.

The fascinating ruins of the pyramids found at the back of the reels add to the hypnotizing intrigue of every game. The reels also feature some exciting characters from Ancient Egyptian Gods and other artifacts reminiscent of the old world including The Eye of Horus, a Scarab beetle, the Pyramids, a Cobra, the Ankh, and the Mask of King Tut. The wild symbol is represented by the Scarab beetle, the Cobra is the scatter, and the Pyramids are bonus symbols.

Low paying cards are those of traditional characters found on a deck-of-card including the numbers and Aces. High paying symbols are those from the Gods of Egypt such as the Crocodile, the Falcon, the Jackal, and the Ibis. The game is highly different in perspective when it comes to scoring a free spin. Getting a red bonus symbol on both sides of the reel will increase your chances of triggering the 10 Free Spins Bonus.

Playing the free game also takes a twist as Wilds cover the middle of the screen. They then spread out to all the other reels creating a bigger chance of winning a colossal payout. The new strategy from Temple of Luxor allows you to win as much as x11 on symbol combinations.

As with other latest slot games, Temple of Luxor also has an auto button for an automatic gameplay. This creates an uninterrupted series of spins having the same about of bet for a continuous gameplay.

In terms of game similarity, there are no games in the market having the same number of reels and game concept as Temple of Luxor. There is, however, a myriad of Egyptian-themed games like Cleopatra by IGT which has the same theme and similar characters as Temple of Luxor.

If you live in Canada and want to experience these cool slot machine games, visiting a no download no registration site like Slots Million Casino will give you hours of excitement and fun. They offer some of the best bonus giveaways including huge sign-up bonuses and no deposit game plays.