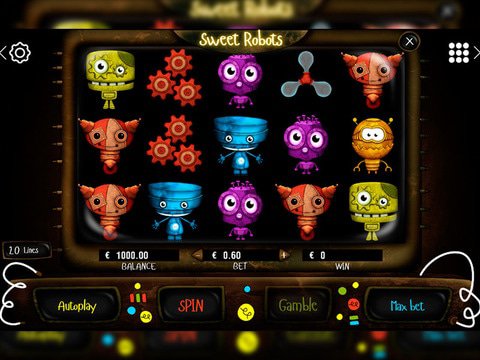 It is an undeniably fact that there are those who strongly believes that are current path of technology will sooner or later lead as ablaze in a point where the rulers of our nations are overridden by robots and machines. There are those who believes this to be a stellar result and those who fear it. Either way, one thing's for sure is that we have to start looking at robots the other way and may be even treat them better. Booming Games Software will give you this very chance of acclimating with machines of the future through their Sweet Robots Slot Machine. Fear not as the game isn't about any terminator-like robots, but more amiable ones that are caring and harmless. Enjoy your time with these robots with no risks whatsoever, through the help of the Sweet Robots free play slot demo provided in this page with no registration and no download needed to proceed.

The game takes a turn to the dark route despite the fact that it contains more amiable robots on its dimension. This could be the sign that the turnaround of the events we fear are all within our hands and if we luckily get combinations that these machines would love, then they could even well reward you with outstanding prizes. Booming Games Software recently became more renowned due to their graphically compelling games and the Sweet Robots Slot Machine firmly fits in this claim. The controls of the game are neatly placed at the bottom of the page with the information at the top. More controls and information are also placed on the left and right buttons at the top bar, giving players a more dominant hold on the reels. You'll certainly have fun with the games 20 pay lines and you could even adjust betting amount up to 60 coins per spin max. In the game, you'll also see various machinations from rotating wheels, yellow square robot, orange circle and cat-like robots, purple and blue robots, and a pink and green contraption. The pink and the green contraption are important to the game with their special capabilities with the former equipped with the wild capability to be substituted by other symbols to complete winning combinations while the latter boasts a scatter ability to provide free spins to users. If you're lucky, the wild symbol at max could also reward you up to 15,000 coins, making it evident that the game is actually a very rewarding one.

If there's any other robot-themed game that you should play other than the Sweet Robots Slot Machine, then it's definitely the Terminator 2 Slot from Microgaming. Though it's a movie-themed game, it's a very well representation of the Armageddon served by the treacherous robots and with a 5-reel and 243-payline structure, there's bound to be lots of chances to grab the winning jackpot prize of the game that can reach a staggering amount of money.

To befriend the robots of the Sweet Robots Slot Machine even more, it is imperative that you play the game longer and spinning it at Tropezia Palace Casino would help a whole lot. This is through allowing you to make the most out of your money with its overflowing amount of bonuses.