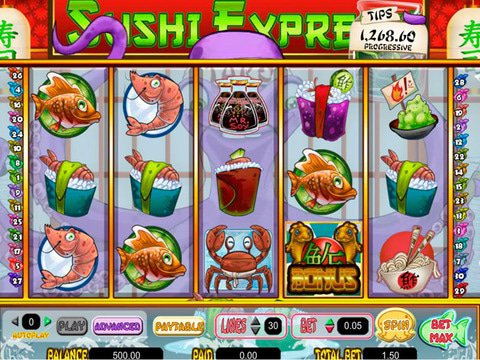 With the abundance of games that have been made with the countries from the Grand East as inspiration, it is an understatement to call the competition tough and there's simply lots for you to choose from. Amaya Software has developed the Sushi Express Slot Machine, which is an obviously East-inspired game. However, hold your horses and don't judge it just yet as the game cuts itself above the masses with its intricate and unique characteristics that shows off the developer's out-of-the-box thinking that goes way beyond their duty. If you've ever been to the land of the rising sun, you'll see that the game does justice to what of its most impressive food culture and even if you haven't you could just simply play out the game through the Sushi Express free play slot demo in this page which comes with a version that needs no download and no registration to play.

One of the Iconic food In Japan

There are bountiful amount of foods in Japan that are testaments to just how rich the food culture of Japan is. However, there are few from them that has stood above the rest and came out spreading their wings across the globe - one of which is sushi as portrayed in the Sushi Express Slot Machine. In this game, you'll feel like you're in a restaurant in Japan where Sushi are placed on moving platform where you could simply pick your treat. The 5-reel and 30-payline gameplay of the game comes in an art that resembles the famous art form from Japan as well, featuring a not-so-realistic setting where the chef is an octopus. However, it is by no means that the octopus doesn't fit the game because it completely blends in especially with its topnotch animation throughout the game along with the platform that continuously rolls in even when you're not spinning the reels. In the reels, you'll see some of the most common sushi rolls, seasonings, wasabi, noodles, shrimp, fishes and a crab. The highest-paying symbol of the game is the master of the restaurant, chef octopus, with its 1000-coin prize and a wild capability that allows it to transmute to other symbols when winning combinations are possible. There's also the highly elusive and impressive bonus symbol of the game, ready to give way to a bonus round followed by a series of free spins to boot. However, the most exciting aspect doesn't stop there because the game also features a stunning progressive jackpot, leaving you with more prizes to win, the more you play it.

Featuring a pristine and realistic sets of Sushi, Endorphina also moves up to the competition with its 5-reel and 5-payline gameplay that aims to impress. Its graphic route is entirely different to Sushi Express Slot Machine but of course, both exude an aura of the East perfectly. There are few things to look forward to in this game that will complete your experience despite its lackluster jackpot.

If you want more time with Chef Octopus, make sure that you play the game through Cresus Casino. You'll have more dough to play with the reels through its free spins bonus, match-up deposits and other benefits from programs. Not only that, but you could maximize gaming through its mobile version and flash version.