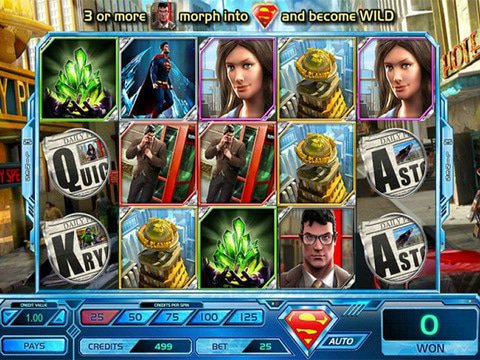 Despite Heroes being an oddly popular theme when it comes to slot games, there's not that many games out there that's infused with peerless graphics and gameplay that will match the protagonist's shining characteristics and do them justice. However, Amaya Software puts an end to these predicament as it finally puts up one of its latest installment in its Superman collection, the Superman Last Son of Krypton Slot Machine which may just provide you with nostalgia and boil your inner depths with excitement. The game is certainly far from those games that have no substance and furthermore, it's more than enough to say that the game is also a top contender when it comes to its visuals and aesthetics. If you're itching to know more about Clark Kent in this story, then you've come to the right place as this page is imbued with a no download version of the Superman Last Son of Krypton free play slot demo that requires no registration as well.

There are certain games that rely on the star's popularity to catch attention along with a catchy tag line to motivate individuals. However, this version of the Superman slots wouldn't need all those fruitless endeavors and infusions as its gameplay and rewarding prizes alone will be sufficient to get anyone excited for more spinning action. The game is set in the middle of the town, rendered in a 3D graphical appearance that you'd often see in movies. The breathtaking and picturesque view of the town, shows some damages and chaos, making it evident that some hero action is going to happen. The reels at the center plays with a 5-reel and 25-payline gameplay and this is where the juicy rewards start. You could choose denominations easily and widely with its betting range and controls that could go up to 125 coins per spin. The spin button, amazingly, is the superman logo that brings up the game's atmosphere into new heights. There are several circle symbols with different newspaper headlines, the leading lady, krypton, a police officer, superman, villain and Clark Kent in his disguise. The wild of the game is also the symbol of superman that can help you win even the outstanding jackpot of the game. When 3 or more Clark Kent makes its way to the reels, it would also morph into a wild, making way for more winning combinations extremely rewarding. There are also a plethora of bonuses to indulge on from Louise Lane's Wild Hearts to Lex Luther Frozen Wilds.

With the popularity of Superman, it is no surprise that even Playtech joined its fray through another superman-themed game, the Superman II slot Machine. It's the sequel to the first installment in the software's library, equipped with a 5-reel and 25-payline gameplay topped with a decent graphics that shows off the life of this powerful hero whilst boasting a 5000-coin jackpot at its pinnacle.

Even in the Superman Last Son of Krypton Slot Machine, you'll surely need all the help you could get and Cresus Casino could give you that. You'll be able to spin more freely with 20 free spins and match-up deposits at your disposal, while you could bolster your winning chances more by joining the site's exclusive Loyalty and VIP Programs.