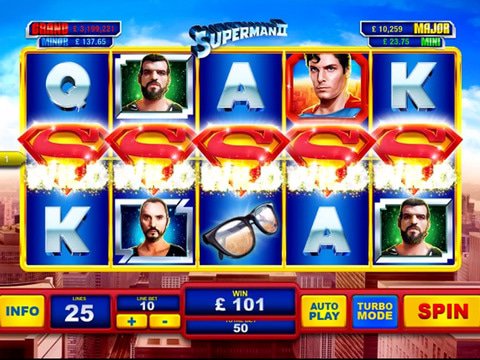 Save the world together with one of the most popular superheroes of all time and play the Superman II slot machine. You can check out the game's demo version on this page for free. No download is needed to open the game and learn how you can earn huge cash with Superman.

Playtech Software has developed several games inspired by the DC Comics series. In fact, the gaming giant has already released its first installment of Superman-inspired game, which is named Superman I slot machine. After its success, the same gaming software launched a much improved version of the game and named it Superman II slot machine.

On this second release, the villains of the game is different from the original game. This version features General Zod, Non, and Ursula. However, Clark Kent's eyeglasses and Lois Lane are still on the game. The visual designs are also updated, but the awesome overall presentation is maintained.

Superman II slot machine has five reels waiting to be played. You can bet on the 25 available pay lines. If you prefer a lower number of pay lines, this game isn't for you because you cannot minimize the number of betting lines. These 25 pay lines are fixed. Although you are required to play all the betting lines, you still have the control to configure the amount of bet. You modify your stake as low as 0.01 and as high as 1 coin per line, giving you a possible maximum bet of 25 coins per spin.

Fighting the group of evils can be very rewarding. When you find three or more images of blank on the same pay line, you will earn blank. Matching other symbols such as eyeglasses, kryptonite, the villains, Lois, and common playing card letters from Jack to Ace lets you win prizes ranging from 10 to 300 coins.

You can also fly high by getting the image of Superman. Five icons of our handsome superhero can lead to 1000 prize. Keep an eye on the Superman logo as it serves as the wild symbol. It can replace all other symbols except for the scatter icon. Aside from that, hitting three or more Superman logo will allow you to win up to 5000 coins.

Since our protagonist is attached to the Daily Planet newspaper, it serves as the scatter symbol of the game. If the Daily Planet logo lands on first, third, and fifth reels on the same time, the Daily Planet Headline Bonus will be triggered. This round will offer you different ways to win. You can choose between Skyline Fight, X-ray Vision, Phantom Zone, Battle for Metropolis, and Lois and Clark Bonus. Any of these Superman bonus rounds will definitely give you exciting prizes.

Batman has also paved his way to the gaming world. You can check out NextGen Gaming's Batman slot machine. Pay lines of this game is twice as much compared to the 25 paylines of Superman II slot machine.

Visit the Sports Interaction Casino to enjoy the free play slot of Superman II. Canadian players will definitely love playing the game with real money even on mobile gadgets.