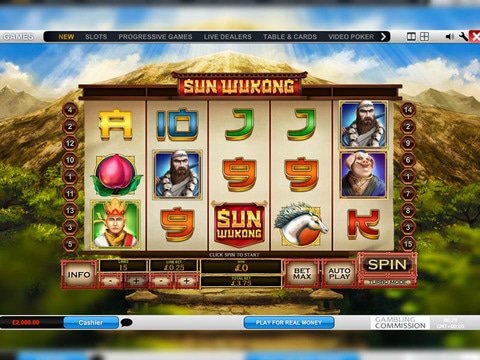 Deep within the annals of history and legends borne from China, comes a variety of mythological and mythical creatures that have etched themselves concretely on the lives and hearts of many. One of the key figures of these legends involves Sun Wukong more commonly known as the Monkey King. With this figure's fame, it has become a target for inspiration for various products, even slot games. The brand of Playtech made sure to exhibit this kingly figure in the most extravagant way by developing the Sun Wukong Slot Machine, one of the best slots on the library of games owned by the software. Each elements at play on this game was made sure to bring off the majestic and imposing story behind such an iconic figure and you will surely benefit if you try the no download demo of the game provided in this page. With the review below plus the Sun Wukong free play slot version, you could get a clearer view of what this game can do.

The legend of Sun Wukong or the Monkey King could be traced way back in the time of the Song Dynasty, giving him a more prestigious and more legendary stature than any have ever given him credit for. The game emanates an imposing vibe the moment you step into its domain as a mountain with dramatic setup welcomes you. The center reel consists of a simple-looking structure with its controls at the bottom. Despite its simplicity however, it is possible to see that the game is impressively accomplished and developed, both in terms of art, rewards and overall gameplay. Its betting range could be easily adjusted with its controls and you could move it from £0.01 up to a staggering £1,125 per spin. You could also change the 5-reel and 15-payline structure accordingly. Aside from the card icons, the more important symbols involve a horse, peach, emperor, pig-man, soldier, Sun Wukong and the logo of the game. The Logo is treated as the scatter that could bless you with multipliers along with free spins. Sun Wukong also has a special role as the Wilds of the game, which could help you complete combinations while also multiplying your wins by 2.

The Dragon Emperor Slot created by Aristocrat, is another game you could try, which features yet another mythical creature from Ancient Lore, especially from the Orient itself. It exhibits and features a 5-reel and 25-payline gameplay wherein you'll have 243 Ways-to-win opportunity. The jackpot of the game is a whopping 1000x of your actual bet which could go from $0.60 to $120 per spin, making the game incredibly straightforward and lucrative as well.

Despite Wilds and Scatter symbols helping you win in the Sun Wukong Slot Machine, you should still be not contented with the advantages it already brings. Exploit other advantages and make sure you work under the best state possible by playing the game at Slots Million Casino. It awaits players with its 100% match-up to a max initial deposit of $100, paired up with 20 free spins bonuses a day for 5 consecutive days. Seeing that it's from Playtech, it also boasts superb reputation and security while being available on flash-play version only.