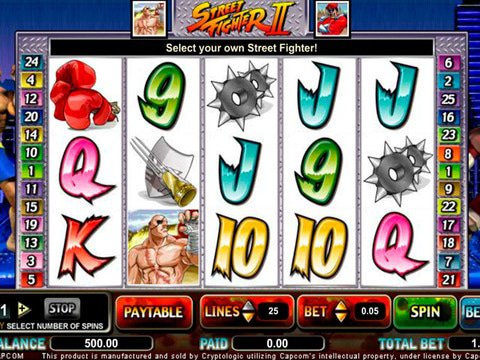 During the rise of video games, the Street Fighter from the brand of Capcom, has become one that has helped in revolutionizing the gaming industry as a whole. Until today, the brand and the title remains one of the leading names in the industry which only makes sense why other industries tend to capitalize on its popularity for more hits. The waging industry is the same as Amaya Software has produced a whopping slot game of the same name - the Street Fighter 2 Slot Machine. As per the title, it follows the second part of the Street Fighter brand and if you're fairly familiar of the game, you're bound to discover some neat features that were embedded to make the game truly iconic as the original one. However, did it do justice for the game? That's what you need to find out through the review and the no registration and no download Street Fighter 2 free play slot demo in this page.

A Video Game Turned to Slot

With the iconic title being an extremely popular one, the standard set by the users of the game were fairly high and thus, majority of those that have tried the game gave it a thumbs down, indicating that the video game was poorly turned into a slot. However, that's all due to the graphics alone as can be seen on the not-so the same appearance for characters. The game runs on a 5-reel and 25-payline gameplay and considering the additional features of the game while ignoring the poorly made graphics, the game can still be considered quite outstanding. The game is filled with various symbols from card icons, to ball crushers, skulls, boxing gloves and claws and mask, which are all weapons of Street Fighter game. The Wild symbol of the game is determined through your help as you pick your character that will be fighting Bison. The two characters can be seen at the opposite corners of the reel and if you think that this kind of feature is just for aesthetics, you're completely wrong. The two characters can engage in a fight and that's when you meet certain conditions that's started when your character and Bison is on the 2nd and 4th reel, respectively. There's also the scatter logo symbol of the game, which can even payout anywhere with 2 or more of it on the reels.

If you're looking for a video game that has magnificently been turned into an online slot like Street Fighter 2 Slot machine is the Zuma Slot from Gamesys. It comes with visually compelling graphics that really does justice to the popularity of this game whilst a 5-reel and 20-payline structure gives you plenty enough opportunities to win. Over $100,000 is also up for grabs in the game, giving no reason to players not to play it.

Whilst Street Fighter 2 Slot Machine may not be the most visually compelling video game slot out there, it still comes with fairly satisfying features and winning chances, and playing it at Cresus Casino will surely help you great deal. You'll be able to revel on 100% match-up to an initial deposit of $150 max, and 20 free spins to spend freely. There's also the elusive VIP and Loyalty program, possessing exclusive benefits to members.