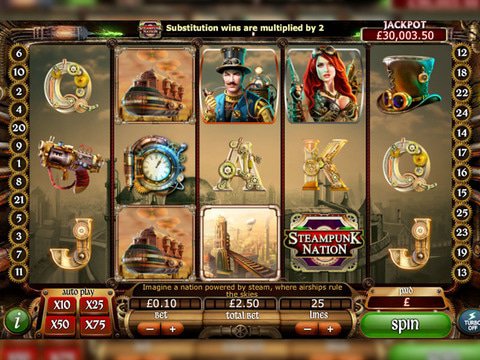 With the vagueness of the Science-fiction genre, there's a lot up its sleeves that have undeniably set itself more noteworthy and noticeable than its peers. The Steampunk is one such sub-genre in Science-fiction which breaks the norm, banish the conventional and show an anachronistic and dystopian perspective all with the indomitable and unique characteristic of showing Steam-powered technology. With this kind of unique concept, the Steampunk Nation Slot Machine has managed to ravage the market and make its way to the top, further solidifying the fame of its developer, the 888 Holdings, on Canada and other Western Countries. The robust theme of the game is something any wager would be able to appreciate and you certainly wouldn't be able to contain your anticipation to play it. Do not worry as you don't need any restraints - you could play the game through the no download Steampunk Nation free play slot demo version here, and review the game with no registration needed.

Delve into a Dystopian Steam-powered World

What makes science-fiction games incredibly attractive is the way their creative ideas are turned into one of the most compelling things you'd be able to see. The Steampunk Nation Slot Machine stays true to this and even offers more as it will take your breath away with its visually mind-blowing setup that's unquestionably a cut above its competition. The game occurs inside a Steam-powered engine and the occasional sparks on the engine does magic for the overall atmosphere of the game. The historic-looking reels at the center are also worthy of attention as it comes complete with symbols that are intricately made to perfection. The game comes with a 5-reel and 25 fixed payline setup along with a simple control system that would only allow you to change betting amount and spin. Going back to the symbols of the game, it has card icons as lower-paying symbols along with other amazing symbols like the Zeppelin, two characters with opposite sex, a hat, gun and clock. The Dystopian world of the game serves as the scatter while the logo of the game itself plays the role of the Wild. Another amazing feature of the game is a whopping random Jackpot prize, capable of sweeping you off your feet with incomprehensible prizes.

With the unbelievably beautiful and breathtaking scene provided by the Steampunk Nation Slot Machine, it is understandable that there are not many in its category that could match it. Still, you could try another steampunk game if you'd like - the Steampunk Luck Slots. Developed by SkillonNet, it has a 5-reel and 20-payline structure while up to 1500x your bet awaits you as its staggering jackpot prize.

The place where you'll pull the reels contribute a lot to your winning chances especially nowadays where many site competes to attract players with abundant promotions. We suggest players to play the Steampunk Nation Slot Machine at 888 Casino and experience tons of benefits like no other. From superior security and banking options, up to groundbreaking bonuses from $88 no deposits bonus to a match-up that could double up to $200 of your deposit, there's no doubt that this ever-popular site remains to be a place that any wager would covet to play at. If you think the same, gear up and play right away.