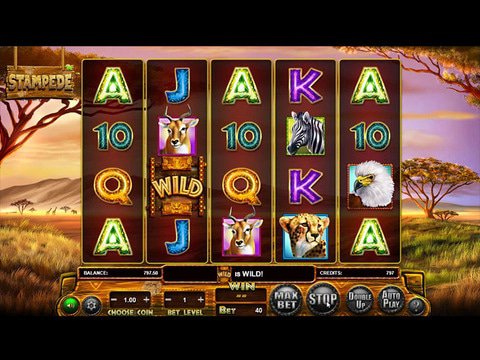 No one would surely want to find themselves in the middle of a stampede of Wild animals, as there's no doubt that such a situation only entails a gloomy end. However, the end result would definitely be totally different if you're playing the Stampede Slot Machine, developed by the outstanding Betsoft Casino Software. As reason and logic suggests, it is easy to conclude that the game would showcase varieties of animals that are known to cause stampedes but what is really amazing in this game is that the more stampede you get, the more cash you'll stand a chance to bring home for yourself. Never has a stampede been more appealing than how this game portrays it and you can find out more about what makes it a Canadian favorite, with the no registration and no download Cash Stampede free play slot demo in this page.

The beauty of Africa is something that words won't be able to describe easily but through the Stampede Slot Machine, you'll surely be able to have a glimpse of its world with the vast plains, trees and the sun covering the area which your eyes can see, which will no doubt be able to impress you instantly. Shifting your attention to the reels, you'll see an impressive 5-reel matrix with 1024 ways to win, showcasing stunning set of symbols to play with. There are card icons with low pays along with limited number of symbols centered on five different animals - horses, antelopes, Bison, Rhinoceros and elephants. Of course, there's also the Cash Stampede Wild Symbol and a bonus scatter symbol that will give you higher chances of winning loads of cash at the end of each spin. The scatter can offer you lucrative free spins while the wild can substitute for symbols to complete winning combinations. The wilds also turn sticky for a single re-spin if you get it as a part of an animal stampede combination, which means that you'll have another chance to make the stampede bigger. When in free spin bonus round, a wild symbol will always be at the center of the 3rd, which can still trigger the re-spin and sticky feature of the normal wild symbol. The game is incredibly mesmerizing and impressive although its cash prizes may not be as appealing with only up to 100x your bet as its maximum cash prize. Even though it may not have an impressive reward, the frequency of your wins will surely make up for it as you'll surely accumulate massive cash sooner than later.

You'll also find the Cash Stampede Slot Machine from NextGen gaming to be an incredibly viable choice to play with its 5-reel and 243 ways to win matrix. It is packed with stunning wilds and free spins features that will surely make every spin an exciting one for you.

We recommend you to play the Stampede Slot Machine at Sports Interaction Casino. It's a highly revered site for gamblers as it is packed with over-the-top software, customer support, banking options and more. It is even available via mobile, download and flash-play version, while even providing heaps of bonuses from no deposit bonuses, dollar-to-dollar promotions and more.