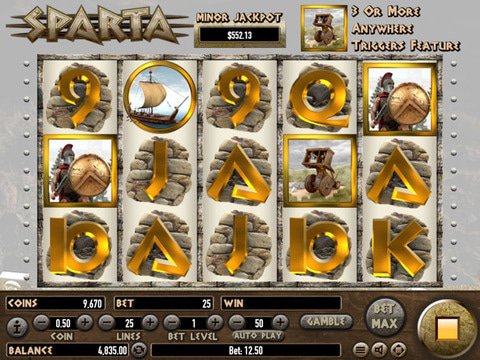 Nothing seems more glorious than the past Ancient Greece as they produced one Spartan Warrior after another, who worked arduously with their lives on the line in the hopes to keep the Freedom of their City, theirs and theirs alone. There's no doubt that being taken back to that exhilarating time would give anyone shivering excitement and of course, hope to find lucrative treasures as well. In the Sparta Slot Machine, test your might and strength, snatch the pinnacle of glory and gain merits - if you do so, there's a high chance you'll receive golden rewards at the end of your military life just like many Canadian wagers have already done. Build up your resolve to play this game with real money with the Sparta Free Play Slot, which wouldn't let you take risks at first while also requiring no download and no registration process at all. You could solely focus on giving the game a review and check if it's the adventure that's right for you.

The Sparta Slot Machine will take you to the outskirts of Ancient Greece where grasses, land and rocks fill the areas as far as your eyes could see. The background comes in a completely realistic art making the game even more convincing. At the center of it all, the reels are brandished with a border made of rock texture and the background of each reels come in white, which is certainly the color befitting of the majestic Ancient Greece. The most common symbols that are far too plenty in the game are the golden card symbols placed on top of rocks, making them fitter for the theme. Other rarer symbols on the other hand, like the Sparta helmet, blacksmith tools and swords, and the ship, are higher-paying symbols you'd hope to land on your reels. More specifically, the ship is the one you'll need as it pays a whopping 2000-coin jackpot. There's also the Warrior which is an Expanding Wild Symbol, taking over the whole reel which it lands on to help you get winning combinations much easier. Zeus and the destructive Ballista embodies the Scatters of the game, bringing you good fortune through multipliers and free spins that will further improve your winning chances.

Other than the powerful warriors or the Spartans, the Ancient Greece is also particularly popular for their own legendary and mythical literature from Zeus down to Minotaur Monsters. Legends of Greece slot from Saucify will show this side of Greece which is certainly different from the path which the Sparta Slot Machine took. Still, both games are incredibly entertaining and the 5-reel, 20-payline Legends of Greece even packs that could treat you up to 100x times your bet.

Go to war and battle it out with destiny fully-equipped with every advantages possible by going to the Club Gold Casino. Here, you could maximize playing the Sparta Slot Machine or even other Habanero games, reveling on initial match-up promotions up to your third deposits, along with regular bonuses from free spins bonus and no deposits bonus that are always refreshed for player's ultimate convenience and experience. With the help of Club Gold, you're bound to win the war and accumulate lots of spoils to add to your treasure vault.