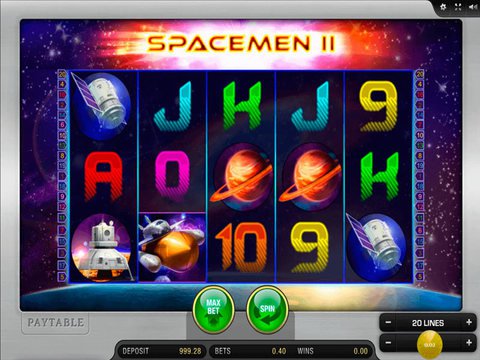 Explore the cosmos and beyond, and revel on what the otherworldly side of our galaxy has to offer to good old regular gamblers down on Earth, through the Spacemen 2 Slot Machine, powered by the revered Merkur Gaming. It is fairly easy to conclude just what its name implies, that the game is a sequel to the Spacemen Slot originally developed and released by the same brand. With its resounding success, it only makes sense that the brand will take the opportunity to try a second time around to see if it can once again allure the players into the amazing and brilliant display of Space and its vast and encompassing elements. Whether you're Canadian or not, this game is certainly for you and if you're not too sure about that, you can reaffirm things and get to know more about it with the no download Spacemen 2 free play slot demo embedded in this page.

The Brilliance of the Starry Sky

Despite the shortcomings of its first installment to the sequel, the Merkur Gaming has made it a firm lesson and developed the Spacemen 2 Slot machine with the intent of covering the flaws of the first one. It is undoubtedly evident just seeing the changes of the game and from those changes alone, it is pretty easy to see that the feedback for the game inclines on the positive side. The graphics and aesthetics of the game are rendered more beautifully than ever as the starry sky are depicted in a more dazzling manner while the earth hovers below the screen just like what you see in movies. The center is where the robust and cutting edge reels of the game is place, playing with a 5-column and 20-payline setup which you can change at your whim compared to the first one's fixed pay lines. Bets in the game can hit up to 40 coins per spin which can accommodate more types of rollers than before and with that kind of change, you can also expect more winning opportunities for you. The jackpot of the game now is at 20,000 coins which is something you'll get from the spaceman again. If you look closer, you'll see that the game offers the same symbols but in a design that's more intricately done. There's the Saturn, satellite, a meteor, lander, rocket ship, the spaceman and the sun. The Sun or the ball of heat is the only new thing which replaced the black hole as it also plays the wild of the game along with a double multiplier effect. The spaceman holds the jackpot but, it also has another gracious effect of free spins with its scatter capability.

Net Entertainment and its Elements slot is also something that would be worthy of your time, money and effort. It hosts supreme and cutting edge graphics and 3D features with its 5-reel and 30-payline matrix topped with an impeccable jackpot prize that can skyrocket up to staggering 300,000 coins for those who are blessed and lucky enough to receive it.

We suggest and urge players to play the Spacemen 2 Slot Machine at Lvbet Casino and ensure to play the game with the most outstanding bonuses from regular free spins bonuses and exclusive ones from the site.