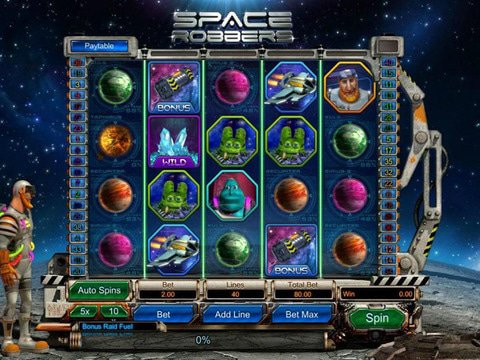 Get thrilled, at the same time amazed, in this space action themed 3D slot machine game developed by GamesOS software. In Space Robbers slot machine, you get to travel beyond our atmosphere and collect interstellar loots in space as you land winning combinations on the reels. Get marveled with the immersive graphics brought by its 3D gameplay and almost real-life sounds from the outer space. Meet with the infamous space robbers and they might reward you with special bonuses. Gear up now and launch your own expedition outside Earth in this free play slot available here with no download required.

This five-reel slot themed after space adventures and missions has 40 paylines for its online and mobile players. You can place wagers for as low as 0.20 credits up to 5 coins per line. This allows you to play with as much as 200 credits per spin to get the jackpot amount worth 3,000 coins.

Since you'll be launched into outer space, then you should know more of the symbols you'll be seeing on the reels. There are various planets you might get to visit during this expedition. Stop by the brown, red, and blue planets and get rewarded with as much as 100 credits. The green and pink planets pay you as much as 150 coins per complete line. An image of your spaceship rewards you up to 300 credits; while the weird-looking alien creatures which pay you between 600 and 900 coins per spin.

The highest paying character belongs to the bearded man which pays you a whopping 1,500 credit payout. This wins you as much as 3,000 credits of your played wager.

There is also the wild symbol on the reels represented by the shining crystal. This replaces any other character on the reels - except for the bonus symbol - to complete a winning line. But compared with any other wild character, this doesn't offer much in terms of instant cash rewards and multipliers.

Out of this World Bonus Features

Aside from these regular payouts, Space Robbers slot machine also offers its players with other bonus rewards from its special in-game features. One of these is triggered by the bonus symbol represented by the space canister. You just need to land three or more of this symbol in an active line to activate the Pick Me round. During this special round, you are presented with three random characters wherein you need to choose one and reveal the prize beneath it.

There are other bonus features available which are only activated when the fuel meter on the screen is filled up. Once full, you get to play the Asteroid Mining, Space Robber, and Solar Race bonus features which allow you to choose a random symbol for instant cash rewards.

If you're looking for other action-filled space adventures, then you must try Rival's Cosmic Quest slot machine. Cosmic Quest slot machine has five reels and 20 unique paylines which have images of space travelers, monkeys, dogs, and many other space-themed symbols. These reel characters have various payout amounts and in-game bonuses. You also get to control your own space ship to shoot down passing asteroids and win as much $12,000.

You can now try Space Robbers' demo version gameplay in 888 Casino with no registration requirement. Canadian players are also welcomed to place wagers to get no deposit and free spin bonuses from the site.