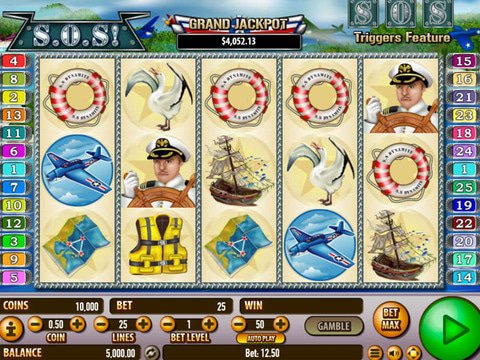 Trapped in an island with no way to get back to your mainland, all you could hope for is to write a signal and wait for rescuers to meet your way. Still, in this kind of emergency situation, you'll never know what fortunes could meet your way and the S.O.S Slot Machine would give you a glimpse of such a hopeful event. The game combines a thrilling and exciting ride for its players by mixing and coagulating hints of urgency and fun in their game. The result? A critically acclaimed fast-paced game that any wager would surely love. It's impeccable appearance makes it even more outstanding and its potentially highly rewarding gameplay has made it even more reputable whether it be with Canadian players or other players from different countries. Below is review of the game and you could also try in this page, the S.O.S Free Play Slot Demo to see and decide yourself if the game is worth your attention.

Nothing is more fitting to be the settings of this kind of game than a far of island brimming with trees and is clearly an unchartered territory. Pair it up with the vast blue sea and you're bound to feel the dangerous situation you're in. Still, the game gives you hope in the form of its reel placed right down the center with intricate and masterful controls which Habanero is known for. The symbols are all related to the theme, whilst you could even get hints of a story going on, making it even more immersive than what you may have ever hoped for. The traditional-looking airplane is the highest paying symbol in the game with 3000 coins at its disposal but any symbol could surely experience a boost if the Pilot, which is the Wild symbol will be included in their winning combination. In that case, the winnings will be tripled, making it apparent that the game has huge potential in terms of winning possibilities. Aside from that, you could experience yet another surge of multipliers with the help of the Whirlpool scatter symbols that could also grant you free spins in the middle of its catastrophic strength.

If you want another grand adventure on-par with what this S.O.S slot could give you, then the Tomb Raider Slots is something you should look forward to play. This game developed by Microgaming is a 5-reel and 15-payline game built to take you to an exploration to find treasures and riches that could even shake the very foundation of history itself. This treasure-seeking game is undeniably one of the most exhilarating in the industry and its whopping $18,750 jackpot prize would further convince you to take the journey with Lara Croft.

Increase your chances of gaining massive amount of treasures in the land of the S.O.S Slot machine by making use of the advantages offered by the one and only, Club Gold. This establishment which uses Habanero is the perfect platform to use as you can utilize its match-up promotion of 100% to $2250, to bring your initial deposit to new heights. You won't even need free spins bonus or no deposits bonus because with this kind of explosive bonus, you're bound to have immense chances of uncovering some serious amount of treasures.