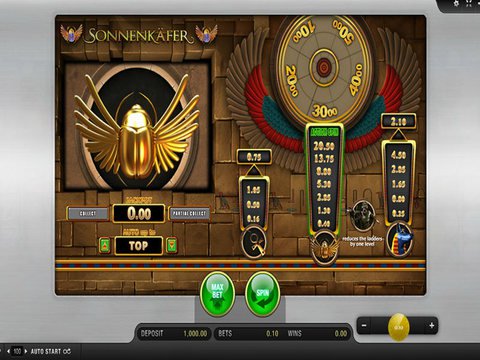 Getting your dose of Egyptian-themed game from the slot industry nowadays is as easy as pushing the spin button in a set of reels. You can simply search the word 'Egypt Slots' and voila! You'll immediately have diverse takes on the Egypt Culture, history and icons. Merkur Gaming has also bumped a ride into this category despite being quite new to the industry and the result of its pursuit to stand above its competition is a completely rare Egypt-based game - the SonnenKafer Slot machine. The origin of the title is something unclear as some says it Slavic while others claim that its German. Nevertheless, the game is oozing with vibe of the aforementioned Ancient Civilization and you can even affirm it yourself by playing it for free with the Sonnenkafer free play slot demo. This will surely benefit Canadian gamblers and other players because you'll need no download to proceed to the game.

Sonnenkafer Slot Machine will allow you to delve towards the deepest cores of the Ancient Egypt Civilization, letting you see its innermost secrets where some of its most iconic characters can be seen. Note it however, that the game will also defy everything you know about slots or your common sense about gambling because this game only comes with a single reel and coupled with a single payline as well. The settings can never be simpler than this but, it is apparent with the innovative and cutting edge aesthetics of the game that the surprise doesn't stop just there. Despite what it looks like, this strange way of things is more lucrative than you may have initially imagined. The game only has four symbols which you can get, making the game one of the most straightforward and less complicated game today. Each symbol, aside from the mummy, comes with varieties of levels and in each levels come higher prizes. Winning each symbol will allow you to rise another level in a corresponding symbol and you can choose to collect everything you've earned or just pocket the partial portion or the highest level you've gained. When you reach the top of a specific symbol as well and get that symbol again, you'll get its uppermost bonus which will award you without collecting the money, making it convenient for those who want to rack up more cash before cashing it all out. Be wary however because all good things may come to an unexpected end and it is better that you collect your winnings instead of letting the mummy take your symbols down a single level each time you get it.

Cleopatra Slot from IGT is one of the most revered Egypt-themed game today and all for good reasons. It comes in a 5-reel and 25-payline structure, jam-packed with symbols and features to help you get closer to its whopping jackpot prize of up to $100,000 for lucky players.

Explore more of what the Sonnenkafer Slot Machine has in store for its players and get better chances of amassing huge sum of money by playing it at Lvbet Casino to revel on great amount of bonuses. Aside from bonuses, you'd have nothing to worry in terms of security and you can even enjoy other games from other software if you want.