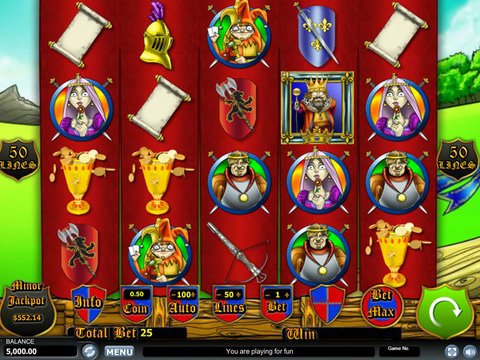 When you here the name Sir Lancelot, whether you're Canadian, American, Australian, Asian or more, there's still no doubt that your mind will immediately take you back to the medieval period - a place brimming with glorious adventures, wars, battles against mythical creatures and of course, acts of Chivalry that will beyond a doubt capture the attention of the ladies. Habanero and its ever-creative team of developers have yet again placed an incredible twist to this seemingly fixed and staple classic as it brings forth the Sir Blingalot Slot Machine. Sir Blingalot is of course, a vaunted knight and warrior with a seemingly cool disposition that you're bound to love. Enjoy the trip down his magical world, review it yourself and pour your utmost effort to get dazzling prizes with no registration, no download and no real money needed, in this extravagant Sir Blingalot Free Play Slot Demo.

The green pastures are spread throughout the background, with mountains far back, trees on the other side and a log with a sword at the very front - this scenery describes what you'll see the moment you step in the world of Sir Blingalot. The game possesses superb visual prowess, while accompanied by stunningly crisp audio in every spin and winning combinations you make. Animations are also included in some symbols, giving it a more professional and awe-inspiring appearance. The symbols on the reels are also made with high-quality depth and details, making the hard work of the team even more apparent than ever. You could review the pay table yourself with ease in a single click of a button through the intricate controls of the game at the bottom of the reel. It has also been customary already in many Habanero games that there's a wild symbol for substituting for winning combinations and a scatter for stupendous free sins and beneficial multipliers, which are portrayed by the Knight and the King, respectively. If you've been a Habanero fan for a long time already, you'll also surely notice that they've accommodated the controls to have a more incredible appearance that conforms to the theme which they didn't do in other games. This kind of new move certainly makes it evident that they're incredibly serious in defeating their competitors.

The Sir Blingalot Slot Machine approached the medieval period in a vibrant, lively and colorful way. However, you could also play yet another medieval period with a darker approach - the Forsaken Kingdom by Rabcat, portraying a bit of the dangerous side of the medieval period that's laden with wars and battles. This 5-reel and 20-payline game comes in an incredibly realistic art that far surpasses Sir Blingalots. While the danger is existent, it is also a chance to get enormous amount of wealth and reach greater heights even on your real life as you'll have a chance to win over $40,000 in this game.

Tread the vast Medieval Period with Sir Blingalot in the grandest way possible by accepting the vast benefits laid out by Club Gold for their wagers. By joining the site, you'll have access to its numerous promotions, from an initial match-up deposit bonus that extends up to the second and third deposits, along with free spins bonus and no deposits bonus that are frequently released by the site.