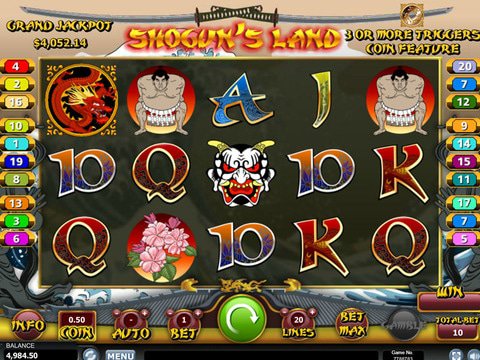 Throughout the countless passage of time, Japan culture have become more widespread than ever, influencing different cultures from different countries, not only in Asia but other countries and continents as well. This is even more so true with the revolutionary era of Shoguns which have been portrayed in various literature, art and other forms of entertainment. With the undying and fervent adoration of various people towards this topic, Habanero has ardently grabbed the opportunity and developed the Shogun's Land Slot Machine. This game will take you back to the times when swords and martial arts were the main forces of people, giving way to a fresh and very appealing gameplay. Experience and review the game itself with no worries about anything in this Shogun's Land Free Play slot, with no download, no registration and even no fees and real money involved.

Not only Canadian wagers, but other wagers from different countries as well, have grown to love these kind of Orient-based themes. This game, in particular, fuses an ancient atmosphere but with the most innovative features ever laid upon by Habanero. You can feel the might of the Shogun's Era as you witness the Buddha statues at the back, while at the center lies the reels which are housing the various game-related symbols. The controls of Habanero were also intricately customized to fuse completely with the game, which is certainly a new approach by this developer. Cool animations and crisp sounds will also be seen and one of which is when you get the Dragon Wild Symbol. Don't belittle this dragon because it's actually an expansive wild symbol, able to bring you a whole reel of wild once it lands on your reels. A geisha on the other hand portrays the scatter of the game that grants irresistible free spins and multipliers. Other symbols have corresponding prizes which you'll be able to see at the info portion of the game, with the scary warrior mask having the highest equivalence reaching up to 10000 coins.

The Shogun's Era Slot Machine is but one of few Samurai-themed games and another that will take you to yet another inconceivable adventure is the Zhanshi Slot. Its name may not be as direct as Shogun's Era, but it still shows the essence of the game in one fell swoop once you enter its universe. Though in terms of overall gameplay, it may not exceed the Shogun's Era, it has a 10000x your bet in jackpot prize along with an existing progressive one that will grant you with wealth and riches which will vastly exceed what you may have expected.

Club God Establishment is surely the best place for you to transport from, to get to the world of Shogun's Era Slot Machine with the best possible state. This is because it will equip you with a lucrative initial deposit bonus of 100% to a max of $2250, followed by another set in your second and third deposits with lower percentage and ceiling. Free spins bonus and No deposit bonus is not given out at the initial entry, but they always get their promotions updated which only means that it's a place where you'll be more than satisfied as you'll be given countless benefits over and over again.