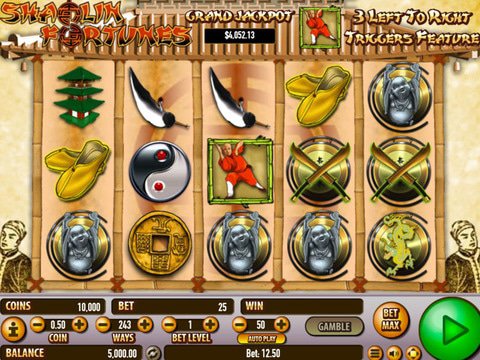 No matter how much time passes, martial arts will always be something grand in the eyes of anyone. China, having their Chinese Temples, is certainly one of the best places to cultivate the mind and body in achieving a synchronous tune with yourself and nature. Experience how that's like as you indulge on another masterpiece of Habanero, the Shaolin Fortunes Slot Machine, and see if you could cultivate your way to success, glory and riches. Though games imbued with Chinese elements is far from being uncommon, Habanero takes a special twist to it, giving it a fresher look that Canadian wagers have already grown fond of. Take a look at the Shaolin way in this game through the Shaolin Fortunes Free Play Slot Demo available at this page. Feel the rhythm of nature with no registration, no download and any other impediments barring your way so you could calmly decide and tell if it's a game that lives up to its claims.

Brimming with the Ancient atmosphere of China, Habanero strays from what other developers would have done as it incorporated not a scenery of China at its background but rather, the surface of what seems like an ancient scroll for Martial Arts. You'll also be able to see Shaolin Masters holding sticks at the side which further implicates the theme of the game. The reels of the game is housed in a Chinese Temple structure with a semi-transparent background where you could seemingly see the appearance of a Chinese Character at the Center. Habanero also sticks to what they've been known for as they stayed as reliable as ever with their massive control system. You won't have any problems figuring out what each symbols signifies as there's an info button that could tell you all you need about them. Each symbol are made with impeccable intricacies with the bell Wild Symbol and Shaolin Bonus symbols being special ones that could heighten your winning chances by leaps and bounds. Though far from being groundbreaking, it also has the Habanero's common 'Gamble' feature, giving you the chance to traverse the path of double-or-nothing in every spin.

When it comes to Chinese-themed games, the Geisha Wonders is also something that tops the bar amongst its peers, including this newly developed Shaolin Fortunes Slot Machine. The Geisha Wonders have already become iconic and is considered to be one of the top games from Net Entertainment. Much like the Shaolin Fortunes, it also brims with the Chinese Culture but in a different way as it depicts the life of Geishas rather than the monks. Its whopping $20,000 jackpot on the other hand, will surely keep you reeled in to the game, making it more evident just how amazing it is.

With Fortune comes complete mastery of your decisions and in playing the Shaolin Fortune Slot Machine, it is necessary to bequeath yourself with as much advantages as you could gather. Play it through the Club Gold Casino and ensure yourself with superior accessibility topped with a 100% match-up to a max of $2250. Though it may not have free spins bonus and no deposits bonus at the moment, it's more than enough to help you grab enormous wins in the process.