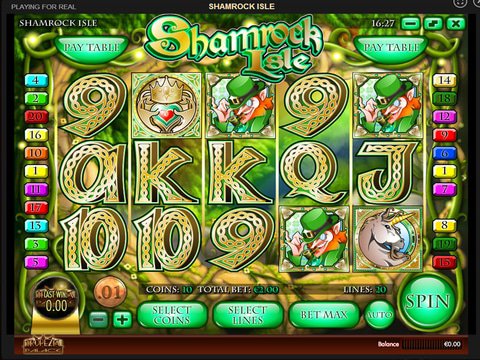 This slot game was developed with the Irish people in mind, it is known that they are one of the luckiest people in the world; the game is run by the Rival gaming software and features the Irish theme. The game has a number of shamrock and lucky symbols, which are represented by the luck of the Irish. Other symbols in the slot game include; crown and heart, the Unicorn and a number of Irish animations. There are a number of casinos where Canadian slot players can enjoy the Shamrock Isle slot game; free slots are also available at the slot game websites, where players can learn on ways of playing the game. Players from Canada can play for free in the Desert nights casino there is no registration is required.

The Shamrock Isle slot game features, 5 reels, 20 paylines, and a number of bonus rounds, which has at least 3 games to choose from. There are expanding wild features during free spins, which are up to 125 in total, scatter symbols are also represented. Lucky symbols which are represented by; the crown and heart, the unicorn and shamrock have payouts of 750, 500, and 400 coins when they all land in a paid line. The lower paying symbols are the card symbols ranging from 9 to an A, with around 5 to 200 coins. The shamrock Isle slot game has coin sizes of around $0.01 to $0.25, with coin amounts been adjusted from 1-10 coins in every line. Players can bet from $0.20 to a maximum amount of $50 for every spin. The wild symbol in the slot game is the smiling Leprechaun, and the symbol doubles payouts during winning combinations. The scatter symbol is represented by the Harp and the pot of gold; free spins in the slot game are triggered by three or more harp scatter symbols, while the bonus rounds are triggered by the bonus round.

The Irish eye slot game features the same Irish theme, and was also released just the same period of St. Patrick day. It also has a Leprechaun symbol, similar to that of the shamrock Isle slot game, and a mega jackpot prize of 10,000 coins. The slot game also features a wild and scatter symbol. Slots capital casino uses the Rival gaming software and offers players $7 no deposit bonus when they sign into the casino. There are also the 2,777 euros free spin chips that are offered to new Canadian players. From our experienced casino advisors we have published Grizzly Gambling's online casino reviews for Canada to assist you in choosing the right casino to play shamrock Isle slot.