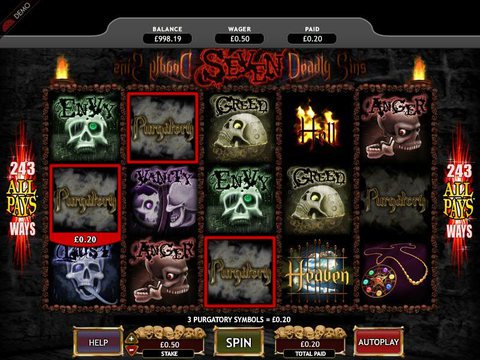 The game developer, Genesis Gaming, has tons of exciting slot machine games available online. Seven Deadly Sins is one of the most unusual titles ever created by the gaming company with a creepy background and ghoulish music. The game revolves around the notion of envy and greed which can be a factor for players who would like to play the game.

A no download and no registration free demo of the game can be found on this site Genesis so you can quickly try your luck with this disturbing yet rewarding game. Try your luck of either entering the games of heaven or the gates of hell in this scary slot game!

The theme of Seven Deadly Sins takes an eerie and ghoulish side with a gloomy soundtrack that adds to the flavor of the game. This game actually compels a player to dig deep into his own life and examine it from every angle as it can lead to a shadowy and sinister world.

Gameplay starts with a dark screen followed by what looks like the Gates of Hell. It can be a somber game if you are looking for something fun and exciting, but considering the pay lines and rewards can actually be good.

This online video slot has 5 reels and can be played with an enormous play line of 243 possible winning combinations. Seven Deadly Sins differ from other slots because there is no standard pay line scheme and winning combinations are created based on matching symbols made by the neighboring rows starting from the left.

The game has diabolical symbols made of skulls, bonus characters, and some added rounds or free spins to increase winning chances. Bets can come anywhere between .20 coins up to a maximum amount of 100 coins. Bets are also computed based on how much is wagered multiplied by 1/25 part of the total bet amount. Combinations formed can have different resulting payouts which can sometimes be paid out with a maximum payout.

Seven Deadly Sins is also loaded with other features including an auto play button which can be used to get a fixed number of automatic reel spins. The bet wagered during the initial play will also be automatically used the entire spin. This can be the best option if you are looking for an uninterrupted gameplay.

It may not appear to be a cheerful game to look at if you are looking for something cheerful, but the game can be the ideal for those who like watching horror films. The payout is tremendously good compared to the ghouly gaming experience because of the other worldly screen that you are forced to face.

Enchanted Crystals, created by Play 'N Go, has a similar payout line except for the game theme which is completely the opposite of Seven Deadly Sins. This Play 'N Go slot game appears on the cheery side with fairies and an enchanting background. A common factor between these games though is they do not have a specific pay line but is structured with a paying combination of symbols.

For Canadians who would like to try the daunting game of Seven Deadly Sins, visiting Slots Million Casino can be a great and rewarding experience. They have amazing sign-up bonuses and tons of other great games you can choose from.