Secrets of India
Enjoyed playing this game?
Rate it → 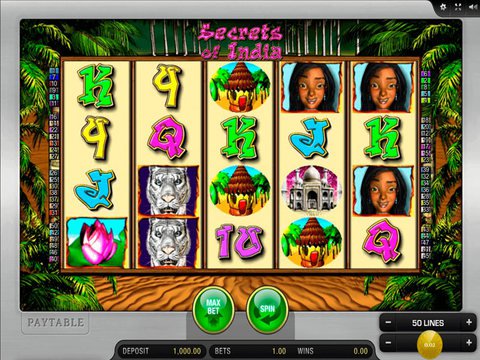 India may not be the richest in terms of financial aspect alone but when culture, people and nature are all thrown into the pool of consideration, there's no doubt that it will arouse the interest of any individuals. Whether you've been to India before or still haven't there are all the good reasons you can think of to try and get yourself into the world of Secrets of India Slot Machine powered by the one and only, Merkur Gaming. This game will help you delve deeper to the core aspects of the country along with what makes it as it is or what makes it 'India'. Canadian gambler or not, you'll certainly gain a lot of advantages in trying the game out yourself with the Secrets of India free play slot demo in this page. You can also read on the review below and through all this, you'll learn more about the game before actually engaging it.

Merkur Gaming may not have the most cutting edge games dominating their shelves but, it doesn't mean that they don't have them. The Secrets of India Slot Machine is proof of that and you'll certainly be in awe once you step in the beautiful, desert-like jungle of this country. Though the land is filled with sand as far as the eyes could see, you'll see plenty of trees along the way as well which only goes to show that it is far from being parched and uninhabitable. The reels also plays on a staggering 50-payline matrix with 5 reels to boot, giving you lots of ways to win and get massive amount of cash. There are low paying symbols in the game which pertains to the card symbols while there are more astounding symbols you'll surely want to look at like a native Indian, palm trees, a Indian Native hat, a Siberian tiger, the Taj Mahal and even a simple hut. The Native Indian plays the role of the wild and with him on the reels, you'll get more winning opportunities with his substituting capabilities. There's also the pink flower symbol which plays the role of the scatter. As the scatter it can award free games to players and during the free games, you'll have more winning opportunities not just because you'll be able to play more but, with also the increase in numbers of wilds on the reels. The game however, may not hold the most eye-catching winning prizes but, if you don't mind accumulating money while having arduous time spinning the reels and having fun in the process, this game is definitely for you.

IGT, one of the biggest software developer today, also has its own Indian slot game in the form of Jewels of India Slot with a 5-column and 30-payline reel setup. It comes with realistic symbols and pristine graphics while utilizing supreme features that will help you get the ultimate jackpot of the game.

If you want to have a bite of what Secrets of India Slot Machine has to offer, play the game at Lvbet Casino. This way, you'll be able to maximize your gaming experience with their stunning amount of promotions from match-up deposits bonuses, free spins bonuses and more than what you could ever wish from a site.