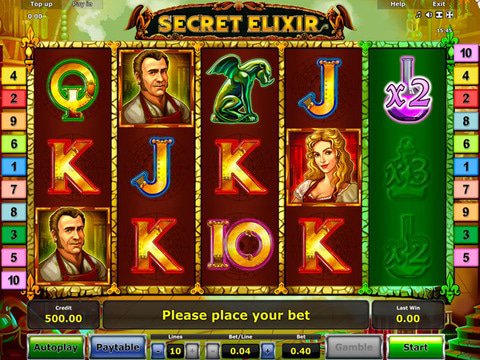 Meet the greatest alchemists in the reel gaming industry as you take part of their philosophical world in this new game developed by Novomatic software. In Secret Elixir slot machine, you play as an apprentice to these pseudoscientists as they try to produce priceless golds from normal metals and generate you big winnings on the reels. There is also an exciting reel feature awaiting you as you try this free play slot on this site with no download required.

This five reel slot machine game has 10 unique paylines for its online and mobile players. You can place wagers for as low as one credit up to a maximum stake worth 100 coins per line. There are also numerous multipliers in this slot, so it is best to be a high roller and play with large stakes.

As mentioned earlier, Secret Elixir has a special reel feature which involves its fifth reel. Unlike the usual reels on most slot machines, its fifth reel is mostly composed of blank spaces with a number of multipliers. These include x2, x3, or x5 multipliers which will directly apply on your payouts.

Since it only has four active reels, all you need to do is line up four symbols to win the highest payouts available. These include the usual playing card symbols which pay you from 8x up to 16x of your total wager. A line four gargoyles grant you a 24x multiplier; while the owl character rewards you with 32x of your played credits. There are also characters of a beautiful lady and an apprentice looking guy who pay you with 80x of your stake.

The highest paying character in Secret Elixir slot machine is the Aviator which rewards you with a 400x multiplier - which may amount up to 200,000 credits. It also replaces any character on the screen - except for the scatters - to complete a winning line as a wild symbol.

Secret Bonus Rewards From The Alchemist

You can also rack up big winnings from the special feature of the slot. This is triggered through the scatter symbols which are represented by precious green gems. You just need to land at least three of this character on the reels to win 12 free spins. There are also more multipliers on the fifth reel ranging from x2, x3, x5, x10, up to x20 during these free games.

The scatters also pay you with instant prizes up to 100 credits when you line up four of its icons on the screen.

If you can't get enough of your alchemy duties, then you must also try Playtech's Alchemist Lab slot machine. Alchemist Lab is a simple three reel slot machine which has only one payline to wager on. You can place wagers for as low as one coin per credit line and win the top jackpot worth $10,000. So what are you waiting for? Start mixing and matching potions in test tubes and win big in the Alchemist Lab.

You may now try the demo version of Secret Elixir in Cashpot Casino with no registration requirement. Canadians are also invited to play with their real money to get exclusive free spin and no deposit bonuses from this site.