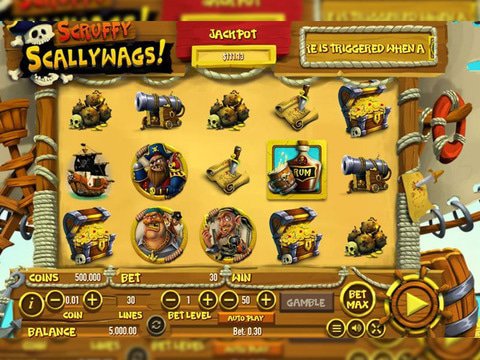 It is plain and crystal clear to see for anyone's eyes, that when a theme is getting overused yet is still being developed one after another, then both developers and users are certainly incapable of getting over the exciting experience which it brings to the public. The pirate theme is one such theme and this definitely isn't the first time that Habanero has embarked in this kind of theme. Scruffy ScallyWags Slot Machine however, aims to stand above its peers and competition with its more unique setup and rewarding experience, capitalizing on being one of the newest additions to the rich library of games of the aforementioned brand. Before taking the leap with real risks involved, it is always better to check out the game first with the Scruffy ScallyWags free play slot demo, with no registration and no download required, for the most convenient test you can ever hope for.

Embarking on a Journey Across the 7 Seas

The moment you arrive at the end of the loading and the scene before you unfolds, is also the moment you'll realize, that you're already on the journey towards pillaging, scouring the seas for riches and encountering dangers. While on the boat, you'll see the vast sea and land at the far off distance but, what you'll see even clearer is the ship and the elements that can be found inside of it. You'll see the wooden materials, the mast of the ship, anchor and even the wheels of the ship which is also the spin button of the game. At the center lies the simple yet prestigious 5-reel setup of the game, topped with 30 fixed pay lines for you to play with. You'll see treasure maps on top of the ship's reels as well, dangerous bombs, weapons like swords and guns, cannons, treasures, the ship itself, and the crew of the ship along with the captain. There's also two wilds in the game - the golden anchor and the golden symbol wrapped up by an Octopus. The rum, on the other end, is the scatter of the game, and by landing it, your crew not only will have a grand time, you'll even be able to win with multipliers on your hand for more lucrative wins. The rum can even offer up re-spins and free spins bonuses, which makes it even more valuable than it already is. Another valuable symbol to take note of is the compass, with more complex bonuses but nonetheless, is as precious as the rum symbol. Atop these vast special features, lies the Ultimate Progressive jackpot of the game, which is more than enough of a reason, for you to try your luck with the game.

Mix up your Pirate experience with some horror and thriller genre, with the Ghost Pirates slot from Net Entertainment. Featuring 243 ways to win, you'll surely want to play the game despite its horrific theme, topped with up to 7500-coin jackpot for you to win.

We highly suggest that you join the crew and play the Scruffy Scallywags Slot machine at Bitstarz Casino. It may only be available in flash-play version but it comes with 20 free spins bonus, 100% match-up to $400 and other whopping promotions and benefits that will make your time here, more worthwhile than in any other sites.