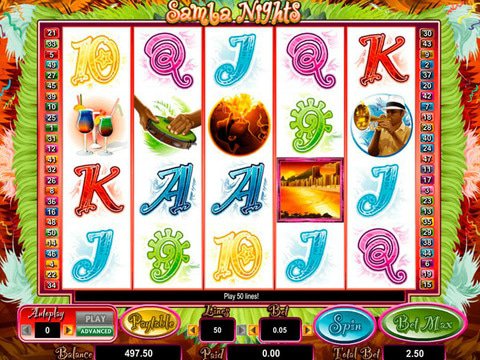 Festivals simply couldn't get any livelier than those which happens on the extremely populous Brazil Municipality, Rio de Janeiro. Simply known as Rio, it has become a great tourist spot popular throughout the globe and has more often than not, been used as setting for movies, novels and even games. Even the waging industry completely recognizes the exhilarating experience this municipality serves, bringing the Samba Nights Slot Machine to the top of the industry when it comes to entertainment and excitement. This game, developed by the Amaya Software, flaunts the dynamic and peerless developments in a carnival or festival in Rio. If you want to have a taste of experience in participating at this festival, no need to worry because no registration, no download and absolutely no money is needed for you to play the Samba Nights free play slot demo provided in this site.

Dancing to the Beat of Samba

With the beat of the Samba welcoming you to the flamboyant world of Samba Nights Slot Machine, you'll surely have great expectations even before you spin its reels. You'll also feel dazed and amazed as you see the colorful streets of Rio that covers the screen, bathed in orange color with pieces of confetti and feathers embellished around the reels. Though there are a lot of elements in the screen, it doesn't look cluttered at all and you can clearly see the 5-reel and 50-payline structure of the game. Betting in the game can reach up to a thousand coins per spin, which will surely put smiles on high rollers. The game comes with subtle sound that are non-intrusive and only plays during winning spin. This is to make sure that you are focused on spinning the reels as you anticipate if cocktails, rattle, man playing a brass instrument, fire eaters or the samba dancing lady will fall on the reels. The girl is also the wild symbol of the game which also boasts a 2000-coin jackpot. Winning her would also trigger a samba audio that will entertain you as the samba dancer dance to the rhythm. There's also the picturesque scene of the sun setting and illuminating the waters of Rio, playing the role of the scatter that can award free spins for more chances of winning it big in the game.

With the exuberant and electrifying experience that Brazil offers, it is no wonder that Samba Nights Slot Machine isn't the only game that transformed its culture into the reels. There's also the Samba Brazil with reels that cover almost the entire gaming screen with its 5-reel and 25-payline matrix. It is developed by Playtech while utilizing equally exhilarating features to help you win. With its maximum bet of $1,250 per spin, it is easy to unfathomable to imagine just how much the jackpot of the game is.

The Samba Nights Slot Machine is truly entertaining and exciting and the only thing that could make it all better is if you win. That could be more possible if you display your utmost potential through Cresus Casino. This site will bring you 20 free spins and massive match-up promotion from the get-go. You can also play it on mobile and flash-play, while also having the choice to join the VIP and Loyalty program to exploit more of its benefits.