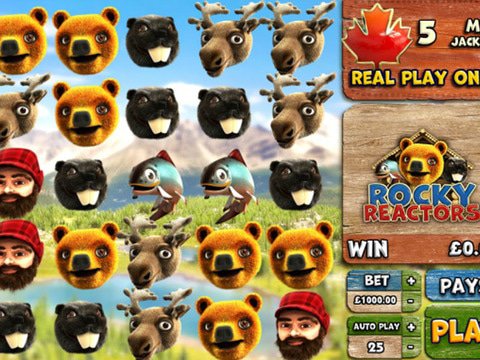 Since time immemorial, slots have encountered countless evolutions and transformations that molded it to what we have today. Still, it is surprising that even the mechanics have been altered by innovative developers today such as Big Time Gaming. With their 'Reactor' series and concept, they have developed countless unique games like one of their most revered title, the Rocky Reactors Slot Machine. It's truly the best example of the reactor mechanic which the developer had come up with. If you are still not accommodated to what this type of game is, then feel free to familiarize yourself with it in this no download and no registration demo gameplay of the game. Countless wagers have given this game positive reviews and there's no doubt that you'll certainly enjoy playing Rocky Reactor Free Slot Play as it takes you to the Canadian Mountain to hunt for animals and other hunters with corresponding prizes.

The reactor series of the Big Time Gaming works in an incredibly unique way as it doesn't make use of paylines to make it work unlike what you may have been commonly playing all this time. In this game, the goal that you should set your eyes on is getting 5 up to 16 same symbols next to each other in the reels. By doing so, you could receive enormous amount of multipliers that will bolster your line-bet which will be your prize for the spin. Each animals in this Canadian Mountain corresponds to certain multipliers with the hunters at the top of the food chain. Yes, if you successfully bring down other hunters, especially if you get 16 of them, you'll be rewarded with an astonishing 100,000 coin reward that's truly massive even when compared to other games. Salmon comes second with 1000x multiplier, 600x for bears, 100x for moose and 50x for beavers. There's also an extra symbol on the game which is the Maple Leaf. This symbol is your true lucky charm as it can give you the chance to get the game's mini, midi and maxi jackpot if you get 5, 6 and 7 and more of it, respectively.

Hunting is a fun adventure theme for this type of game and like the Rocky Reactors Slot Machine, you'll have fun in the Exterminator game as you hunt for a different set of prey - bugs. In this game, you're an exterminator of the creepy bugs and you're undisputedly up for the challenge of your life. This game is developed by Betsoft with a 5-reel and 30-payline structure. It works with the traditional setup of slots, but with a relatively lower jackpot prize. Still, it's 3D Gaming is just as amazing as Rocky Reactors which makes it equally fun and exciting to play.

You can optimize your experience and have more fun by playing the Rocky Reactors Slot Machine in Cheri Casino. This web-based waging establishment is open for playing through instant flash play and mobile version. It is quite lacking in terms of initial bonuses as they have no free spins bonus and no deposit bonus, but it does have a lucrative dollar-for-dollar promotion up to $100 that's more than enough to bolster your winning chances right from the start.