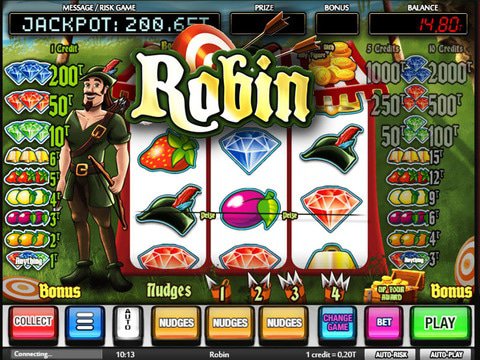 If you have been a fairly devout user or player of the MGA Software, there's no doubt that by now, you would have noticed certain similarities in their games that makes them unique from its competitors. It manages to follow a straightforward format that never fails to surprise, while making sure that it remains surprising to users. This kind of feat is not easy to achieve but you'll see the glorious outcome of this harmonious balance by playing it out with the Robin Slot Machine. Adventuring as the master marksman known throughout the land, the game will without a doubt, be an exciting one that even Canadian gamblers wouldn't want to pass up. Review the game yourself and take a look if it's really worth the rave through the Robin free play slot demo game provided here. Jump into action and into the fray right away because no download and no registration is needed for you to proceed.

Hunting Wealth with the Master Marksman

Robin Hood has always been renowned for his valiant and noble goal of giving back the poor by taking from those who abuse their power and accumulates dirty wealth. Fortunately, the game portrays this invigorating concept perfectly, even amidst the simplicity of its 3x3 Reel that's neatly placed at the center of the game. The graphics of the game also comes in cartoon art, but with a high-definition, crisp quality that are needed for a game to top its competitors. The reel is also as classic as possible with its reels, further reinforced with the fact that its pay table is neatly placed on the screen as well. You could also change your bet accordingly with the buttons of the Command system wherein you could go from the lowest-paying category to the highest paying one which could provide up to 2000-coin jackpot with the diamond symbols. Robin Hood also speaks from time to time when you have valiant victories in spinning which makes the game even more immersive. The game also has nudges feature that's unique to it as you can change the position of a specific reel by one placement. If you manage to accumulate enough points, there's also the upper game portion of the game that will surely welcome you to a more lucrative and bountiful time.

The Robin Hood Slot Machine from World Match, is yet another robin-themed game that would certainly keep you intrigued and entertained. It's got a more serious atmosphere with its 5-reel and 25-payline structure, while also providing lots of bonuses, symbols and more to take advantage of. If you're really lucky, you can even experience the game's free spins bonuses and other features that would make your overall time even more worthwhile.

With the incredibly lavish and luxurious prizes set up by the Robin Slot Machine, it is only logical for a devout wager to make sure that you'll be able to make use of plenty of bonuses to boost winning chances to incredible heights. The best place, in our recommendation, is to play the game at Slots Million Casino. Your first deposit up to $100 will be doubled with each match-up bonus, while providing 100 free spins for you to enjoy with. Dedicated players could also join the Loyalty program while high-rollers could revel on the VIP Program.