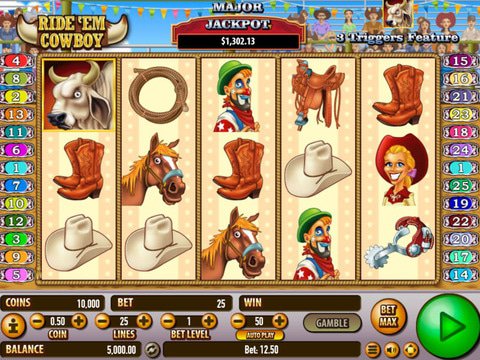 Though machineries have already reinvented bull riding to the point where many have already been able to release the inner cowboys in them whilst riding only mechanical bulls, nothing will still beat the glorious setup of the Wild West version of Bull Riding where you're down at a pit of mud in Rodeo as you embark in a dangerous struggle with the lethal but awe-inspiring bull. The Ride 'Em Cowboy Slot Machine will take you back to this kind of exciting and thrilling Bull Riding Experience that will surely keep you blood boiling in extreme excitement. Will you have what it takes to grab victory at the face of this dangerous sports? Many Canadian wagers may not be fans of Bull Riding, but many have indeed been dazed with this game and you can see for yourself why when you play the Ride 'Em Cowboy Free Play Slot Demo, with no registration and no download required so you could enjoy it right away.

You'll surely feel the heated moment a cowboy would feel before bull riding as the rodeo in the game is filled with spectating cowboys at the blue colored bleachers. The atmosphere is indeed festive, but with a sprinkle of the old west as the reels itself is designed to complement it. Not to mention, there's even noticeable embellishments on the reels like stripes and stars, giving it a more patriotic and nationalistic feeling. The symbols on the other hand, are completely mesmerizing especially with the fact that none are card symbols. You could easily view in the pay table, the prizes for each symbol where you'll see low paying ones and high-paying ones. The highest paying symbol you'll surely wish to get is the Lady Cowboy with 10000 coins at its pocket, but it could also mean just the same if you get 5 of the Cowboy Wild System in a single payline as it can be substituted for other symbols as well, except the scatter which is signified by the bull and can get you some awesome multipliers. Animations are cool especially the ones the cowboy possess as it is also accompanied by crisp audio. Still, the audio of the game could use a little improvement especially the overall background music that's non-existent.

If Bull Riding isn't enough to take you back to the Old Western which you're obviously a fan of, then you'll surely be dying to play the Black Gold from Betsoft. Unlike the Ride 'Em Cowboy Slot Machine that has a bit of sports, the Black Gold is focused in portraying the Old Western up to the point where the reels itself is housed in a vintage kind of house while the controls are at the side of barrels. This 5-reel and 30-payline game comes with superb and crisp audio along with stunning graphics while it can hand you out a total of $5000 as jackpot.

Indulge on the Ride 'Em Cowboy and snatch a more glorious and sound victory through the help of the Club Gold Casino. Give yourself a nice start with a match-up dollar-for-dollar promotion to a maximum deposit of $2250, while having the privilege to access the site via instant and download version.