Play Return of the Phoenix HD online with no registration required!

Return of the Phoenix HD
Enjoyed playing this game?
Rate it → 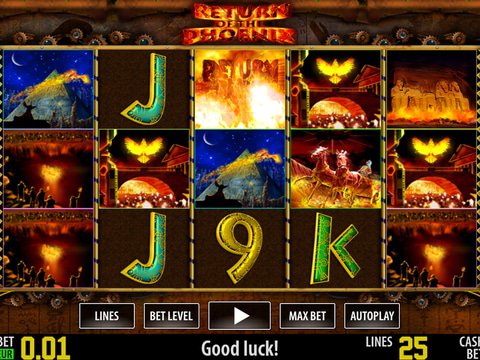 Return of the Phoenix HD

If you're a Canada fan of high-definition graphics when it comes to your gambling, then you'll absolutely love the Return of the Phoenix slot machine, one of several great slots from World Match. It's all about rising from the flames like the great Phoenix, and you can do just that with the Return of the Phoenix free play slot demo available right here on this page! You can find it on your desktop or any modern mobile device from anywhere with an internet connection.

Rise from the Ashes

This particular title boasts five reels and 25 paylines filled with fire and brimstone, but it's surprisingly happy and upbeat at the same time. You can bet anything from a penny up to $50 per spin, and you can win up to $20,000 by landing five Rising Phoenix icons - which also act as wilds - across an active payline. When a Phoenix helps you create a winning combination, it multiplies by that win by three. If it substitutes during the free spins round, that multiplier climbs to 15x! The Return icon will trigger those free spins, and you'll get anywhere from 15 to 25 depending on the number of icons that lead to the feature. There's no second-screen bonus, but with huge multipliers and opportunities to win, you won't miss it.

Another title that's fiery in a different way is More Chilli from Aristocrat. Across five reels and 25 paylines, you'll find lively chili peppers, a Mexican chef, and all kinds of Mexican-themed icons to make you smile. The game offers up lots of wilds and up to 15 free spins during which you can get some extra reels for bigger wins. It's all about collecting the chili peppers, and you can cause the third, fourth, and fifth reels to become filled with wilds during the feature if you're lucky!