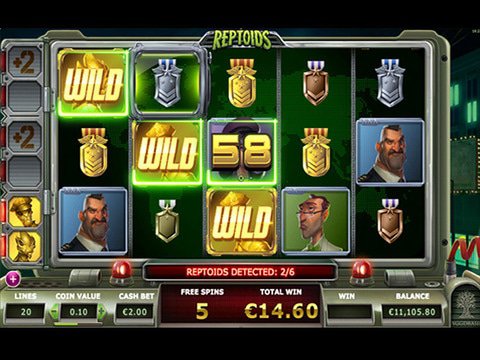 The universe itself is one big mystery for any human being despite the innovative advancements made through Science and Technology. Out of the things that remain mysterious to humans, one concept that still leaves many interested and intrigued, is the existence of another type of lifeform in the Universe. However, what if they are not in other planets but on ours already? This is exactly the eerie yet exciting experience served by Reptoids Slot Machine, a slot game produced by the one and only Yggdrasil Gaming Software. The game is something that lives up to its name and the reputation of the software developer and it has already made massive ways in the mass of Canadian wagers. If you're interested to give it a try, the best way to do so is through the no registration and no download Reptoids free play slot demo version of the game placed conveniently in this page.

They Are Among Us

The game occurs in a certain run-down town with old and new buildings from left to right topped with a vibe that would make you sweat. News of Aliens have already scattered through town as showcased in the impeccable animation at the start of the game and there's no doubt that if you've watched it, you're already in the mood to hunt down some Aliens and save the world for a possible world domination. Looking into the aesthetics of the game, there's little to no doubt that you'll be blown away. The town itself is portrayed with impeccable detail, but what's even more amazing is the fact that the 5-reel and 20-payline matrix of the game topped with its intuitive and comprehensive control system, perfectly meshes with the game's superb theme and concept. What makes the game even more interesting and immersive, are the unique features it has, that will make every spin more exciting the longer you play. In the game, you'll see varieties of individuals that are suspected to be aliens along with various badges that could be yours with the right spin. In the game, there's a scanner that makes it feel more like you're hunting and when it lands on a character, it reveals their true self - Aliens. All other symbols same as the one detected turns wild for a more outstanding chance of reaping rewards while if it lands on a detector, then you could get free spins to boot. There are also extra free spins bonus you could get if you get 2 extra aliens for a max of 6 extra spins bonus. On top of these gracious features comes the scatter symbol of the game which can offer you a staggering 100,000-coin jackpot.

You can also have fun in a more horror-like setup filled with Aliens as well from Aliens Slot Machine developed by Net Entertainment. It's packed with compelling graphics and features in its 5-reel and 15-payline structure while its superb 3D graphics even offers a chance to win up to 570,000 coins while utilizing special symbols for more winning chances.

We highly recommend you to uncover more aliens in Reptoids Slot Machine through Tropezia Palace Casino. It offers a stunning 100% match-up to $100, free spins bonus, no deposits bonus and more which are updated from time to time.