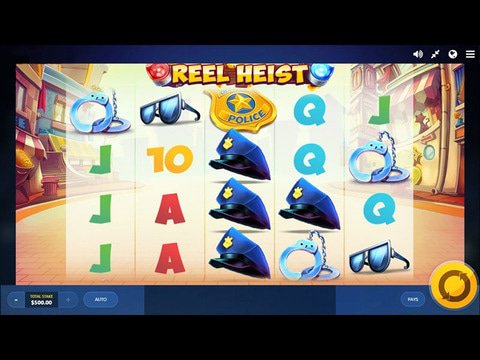 There's little to no doubt that anyone throughout the globe is oddly familiar with the setup between the cops and the robbers - one is the good side and one's the bad side. Regardless of age, anyone would find this setup extremely exhilarating to the point where movies and games alike would showcase its exciting setup. Not to mention, even the gambling industry has done so, with the Red Tiger Gaming Software developing the Reel Heist Slot Machine. Although relatively new to the gaming industry, it has become apparent in this game, that the brand is something that will sooner or later go into the mainstream and even become part of the leading pack of developers. If you're curious as to what this game has that made Canadian gamblers flock to it, here's the no registration and no download Reel Heist free play slot demo for you to try.

The Bout Between Robbers and Cops

With the outstanding and overwhelming graphical display of the Reel Heist Slot Machine, you certainly wouldn't believe that the brand is only but a new software developer in the industry. The gameplay is sleek and superb while the display exudes a vibrant appeal that would make you feel like you're at the town center portrayed on the screen. It's the middle of the day in this 5-reel and 40-payline game, wherein you'll see the stalls and the pavement shimmering under the illuminating light of the sun. Amidst the luster of the day comes the thrilling chase of the cops as the robbers of a bank is scootering away. It's up to you to spin the reels and have the chance to catch the bad guys and get a bountiful reward to top off your experience. There are card symbols in the game with the policeman's shades, cuffs, badge and cap while there's the group of robbers with their corresponding rewards and of course, the policeman who also plays the role of the wild in the game. Just like in any other machines of this type, the wild symbol is an awesome help to the player to bring massive rewards while each robber in the game comes with stunning payouts as well. However, among all of them, the one you'll surely want to get the leader with a black cap worn up to half of his face which will give you an amazing 2000x reward of what you've placed as your bet. Amazingly, the game accepts up to a whopping $60 per spin bet, giving you the chance to win outstanding rewards for a thrilling amount of risk.

Another game like Reel heist slot machine, is a game similarly titled but created by Rival Gaming. The game is all that you'd expect from a marvelous gaming platform, packed with gameplay that you'll enjoy all with a jackpot that's only up to 750 coins only.

We suggest giving the Reel Heist Slot Machine a spin through the marvelous site of Video Slots Casino. Not only would you be able to play it via flash-play and mobile version - you'll even have outstanding bonuses to reap regularly from 100% match-up deposit to $200, a whopping 11 free spins bonus, $10 no deposit bonus and others which are regularly added to its list of promotions.