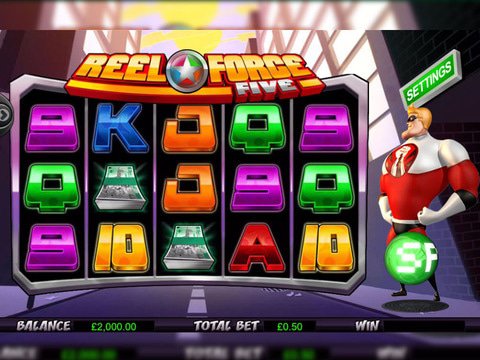 Whether it be on comics, books, movies, television shows or even games - Superheroes have long been tackled in various works that a high standard have already been set on products looming its premises that's truly tough to meet especially with the fickle audiences throughout the globe. Core Gaming Software however, didn't back down to this overwhelming challenge and has firmly placed its stand on this case with its Reel Force 5 Slot Machine. It may not sound like a superhero-themed game at first, but that's only because you may not be that knowledgeable that this game actually pertains to a group of superheroes like Justice League and Avengers, but only with 5 powerful members and a timeless villain to boot. Twists are something you'd never miss from this game and you could get an experience of what the game offers firsthand through the convenient no registration and no download Reel Force 5 free play slot demo in this page.

Canadian gamblers could never get enough of Superhero theme games and there's no doubt that there are also several from other countries and nations that are the same. A great superhero game could equate to long hours of playing and it is simply safe to say that the comical product from Core Gaming Software definitely fits the standard. The entry to the game will put you on a nostalgic ride with the audio and the comic-like drawings, but you'll entirely be surprised as you'll be introduced to a 3D Graphical game right as soon as you enter. A hero that looks like someone from an animation movie, stands tall at the side of the reels, making it evident that he's one of the heroes from this 5-reel and 25-payline game. Bets on the game range up to a whopping £100 per spin and though it may sound a lot, it's a perfect fit for high rollers who wants to take bigger risks for bigger prizes. In the game, you'll see common card symbols, cash, gold bars, and the scatter reel hero symbol. There's also the game symbol showcasing the 5 heroes of the game with the jackpot of 20,000 coins. Each hero also has corresponding symbols and payouts and all of them are wilds, giving you a powerful set of symbols to make use of. There are also award bonuses with varieties of prizes which can also trigger hero-specific bonus rounds that gives the game the right amount of complexity for an invigorating and electrifying experience.

Isoftbet also has its fair share of unique superhero-themed games and visually, it can be more compelling than the Reel Force 5 Slot Machine - the Super Lady Luck slot with a 5-reel and 243-payline setup. The game comes with everything that would exceed the boundaries of your imagination and leave you breathless while it's also imbued with big cash-outs and features to tempt you along the way.

If you want to join the fray in saving cities with Reel Force 5 Slot machine, we recommend you to take the route to William Hill Casino.This site offers a generous 150% match-up to $300 max initial deposit, while also providing loyalty bonuses, high-roller bonuses and monthly promotions. It is also available on flash-play, mobile and download for peerless convenience.