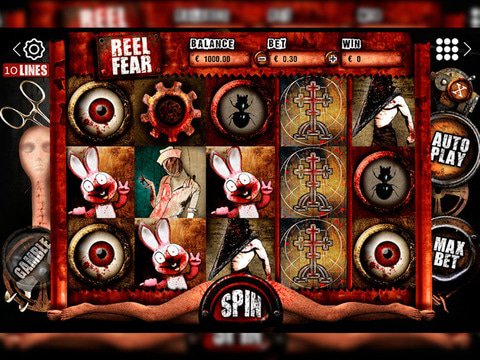 Though the Booming Games Software has indeed experienced rough waters at the start of its journey, it still managed to find itself amidst the sea of competitors, rising above others and finally making its way into a recognizable position. It's been rather well known for its superb fun and exciting slots that anyone would surely find very motivating to play with. However, the software has finally taken a turn to expand its horizons further, creating truly terrifying games that have never before been seen on its library, one of which is the Reel Fear Slot Machine. This game will make you come reeling back to your closet as it features some of the creepiest symbols and one of the most goosebumps-inducing environment. It's not a game for the faint of heart and if you're still courageous enough to traverse the game even after such warning, you could start thinking twice after you tried the no download and no registration Reel Fear free play slot demo of the game.

Cower in Fear of Slots

If you're not that compatible with horror, you may just back out from playing slots when you try this game out. As the game loads, you'll see the nurses from Silent Hill, insinuating that it's like a coagulation of many of the creepiest characters in Horror. The moment you enter the game, you'll feel your spine tingling in fear as the background audio of the game creeps up on your ear. The general theme of the game inclines on the dark side, accentuating the creepiness of the symbols placed on the 5-reel and 15-payline structure of the game. On top of the reels, you'll see a drawing of a hanged man, the creepy moon, swords, the reaper, burning church, a bloodied eye, killer bunnies, the nurse and a gothic creepy girl with stitched mouth. Each symbol and combinations trigger a different kind of audio that makes the game even creepier. The Killer Bunny on the game triggers a deranged smile as it provides you with a scatter capability for a generous free spins round. The gothic stitched-mouth girl closes to the screen when you get it on a winning combination and it comes with an outstanding 15000-coin jackpot on top of its wild capability. You could also prove yourself to be more courageous than others if you're ready to take your winning spin in the gamble feature of the game. Creepy and Terrifying as it may be, the game is still very rewarding which may be enough to tempt any players into its horrid environment.

Diablo 13 Slots from Playson also takes a devious and creepy route like the Reel Fear Slot machine. Though Reel fear tends to be a lot spine-tingling, the 5-reel and 9-payline slot of the Diablo 13 features demonic creatures that has their fair share of own fearful characteristics. Still, the game comes with a 2250-coin jackpot to boot, making it fairly attractive to many players.

Have you collected your courage to confront the Reel Fear Slot Machine for real money experience? If you have, we recommend playing it at Tropezia Palace Casino. Here, you'll have a firm support and security from its topnotch system, whilst also feeling the boost from its surreal set of bonuses from VIP exclusives to ongoing bonuses.