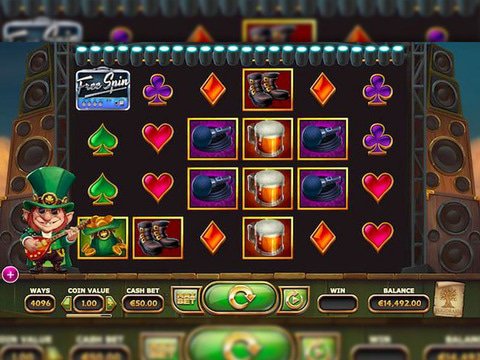 Just hearing the title from the newly-developed game from Yggradisil Gaming, would surely not be enough for you to deduce its theme from the get-go. The Rainbow Ryan Slot Machine, although new, is continuously spreading its name far and wide and sooner or later, no one would be unaware of this game that's centered on the Emerald Isle once again. Yes, you've heard that right - the game is an Irish-themed game and Ryan himself is the cutest Leprechaun that has ever existed. The software has yet again, stepped forth into testing the players' luck and there's no doubt that this one would exceed its competition by a huge gap. Get to enjoy the game with no risk first in order for you to focus on the game itself rather than the prize, through the no download and no registration Rainbow Ryan free play slot demo.

Rock and Roll with Ryan and Luck

There's no doubt that in the Rainbow Ryan Slot Machine, Music, Luck and Leprechauns would rise to the occasion and show-off a staggering combination of theme like no other. The game, unlike the conventional games based on Irish, does not focus on the emerald Isle itself but rather, on an Irish setup with Rock and Roll Music Infused in it. Apparently, the mix is due to Ryan's love for Rock music and as such, every step of the way is guided by Ryan's play of the guitar. The game's overall graphics can only be described as the crispiest and most vivid graphics of today - from the background containing the stereos, the 5-column reel of the game with 4096 ways to win, and the outstanding and comprehensive controls of the system. With so many ways to win, you'll surely be able to welcome frequent wins. Whether you're a low or high roller as well, you'll have a place in enjoying this game since the cash betting range can even shoot up to a full 100 coins per spin. Shifting focus on the reels of the game, you'll see different suits of cards that were polished to perfection. There's also a mug of beer, black leprechaun shoes, microphone and a pile of gold inside the green hat. The game also uses outstanding Wild symbol insignia which acts as a regular wild in the game. There is also a free spin mode, which is something you can achieve through synchronization. Another great feature of the game that requires syncing with Ryan's music is the Rainbow reels, which would also welcome you with huge chance of winning big prizes.

Land of Gold is also another Irish-themed game that you'll surely love other than Rainbow Ryan Slot Machine. It was made by Playtech Software with a mesmerizing 5-reel and 576 ways to win, showcasing the beauty of Emerald Isle in its entirety while utilizing special symbols to boot.

Success in playing the Rainbow Ryan Slot Machine at its best is actually reliant on where you play it. We suggest you to give it a try at Tropezia Palace Casino. Not only is this site renowned and reputable, even if its welcoming package of 100% match-up to $100 may not be that grand, it still has VIP and loyalty programs topped with ongoing promotions to make your gaming experience more worthwhile.