Queen of Riches
Enjoyed playing this game?
Rate it → 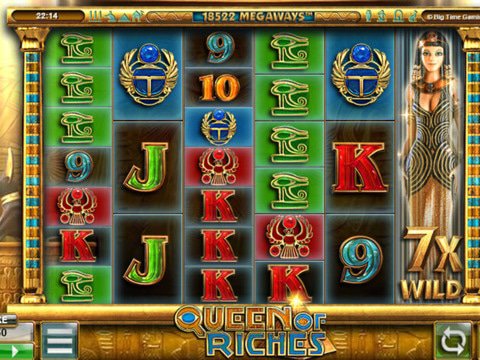 Imagine a world where you're at the throne, sitting at the highest position with all the riches you could ever wish for - such a situation is definitely something that no wager wouldn't want to have and you can experience this as Queen of Riches Slot Machine, a game developed by Big Time Gaming, takes you in adventure in such a world. However, banish the thoughts of castles in the medieval period as this game will take you to the world of one of the most revered rulers of history, the Queen of the Nile, Cleopatra. Still, it will defy what you've usually known and encountered for a slot game and you can discover it yourself immediately through the no download and no registration demo in this page. By playing this Queen of Riches Free Slot Play, you'll know hands-on, just why the game has been a popular in Canada and other portions of the world.

The game's graphics are undeniably on-point as it renders the mysterious yet grand and awe-inspiring vibe of Egypt. The audio are also far from generic audio that many slots use and not to mention, there are even inconceivable animations in the game such as Cleopatra dancing, which will surely bring more flavor to your gaming experience. Big Time Gaming is also rather renowned for its Megaways feature and you'll be more than thrilled to know that it is also incorporated in this game. This way, you'll have over 117,649 ways of winning tons of prizes. The game is bound to help you transcend the constraints of you bankroll and allow you to gain heights that kings and queens would have only been the ones to rich in the past. The game also has its own paytable that you would certainly want to familiarize with first before playing. Also, the game's bet ranges from 0.2 to 40 credits with a chance at winning a maximum jackpot prize of about 1200 credits. It's comparably low compared to other high-rewarding games, but the mere fact that it's equipped with Megaways just means that you'll still have great chances of continuously winning.

With Cleopatra's fame transcending even the constraints of time, it comes with no mystery why it has been used over and over as a theme for slot games. The Queen of Riches isn't the only one themed after it as there is also the renowned Queen of the Nile Trilogy that you must absolutely try. The Queen of the Nile is divided into the 1st part, 2nd part and the Legend edition. Comparing the graphics, the Queen of the Nile comes with a more classic and lackluster look, but its 5-reel and 25-payline structure with over $12,000 jackpot is more than enough to entice anyone to invest time and money in playing it.

If you truly want to become a ruler of riches just like what's portrayed in Queen of Riches, then the establishment where you'll play the Queen of Riches Slot Machine is important. Play it at Slots Million Casino and revel on 100 free spins bonus and dollar-for-dollar promotion up to $100. Even without no deposit bonus and only a flash play version available, it is no doubt trustworthy, reputable and is dedicated to provide top slot gaming experience to wagers.